A few weeks ago I did a post about McCain’s “frequent liar program” that gives out prizes to people who spam political blogs. When his program started, I suffered a dramatic (15x) drop in new readers coming to my blog from news aggregators like Digg and Reddit, but yesterday I noticed an ironic twist to this.

After weeks of my posts getting downvoted in Reddit, one of my posts suddenly started getting lots of new traffic! I couldn’t figure out how this could have slipped by the McCain ditto-heads. The post was titled “I just don’t know about this Obama fellow“, started with a funny comic from Tom Tomorrow, and finished with a analysis of how lack of experience doesn’t predict the greatness of a president. In other words, all of McCain’s attacks on Obama for being “inexperienced” don’t really mean much.

But when I read the comments on Reddit, I just had to laugh. Several commenters thought that this was an anti-Obama article. For example,

Wow, A popular cartoon on Reddit which compares Obama to George W. Bush unfavorably. Given the overtly pro-Obama sentiment of reddit I don’t many of the people upvoting this really thought through the implications of the cartoon.

This comic seems to think that Barack Obama is capable of doing to this country what George Bush did.

My guess is that people looking to down-vote anti-McCain articles saw an article with the title “I just don’t know about this Obama fellow” and left it alone (or maybe even voted it up — wouldn’t that be a hoot?!)

Today, the same thing seems to be happening again.  A comic (not submitted by me, and included below) has been in the top five stories on Reddit all morning. Its title is “What’s Wrong with Obama?” but it is actually making fun of people who believe the negative things about Obama that are being circulated. If you read the comments on Reddit (many of which are racist and stupid) you realize that these people just don’t get it.

You couldn’t ask for anything more ironic. It is funny when people who are all pissed off end up pissing on themselves. 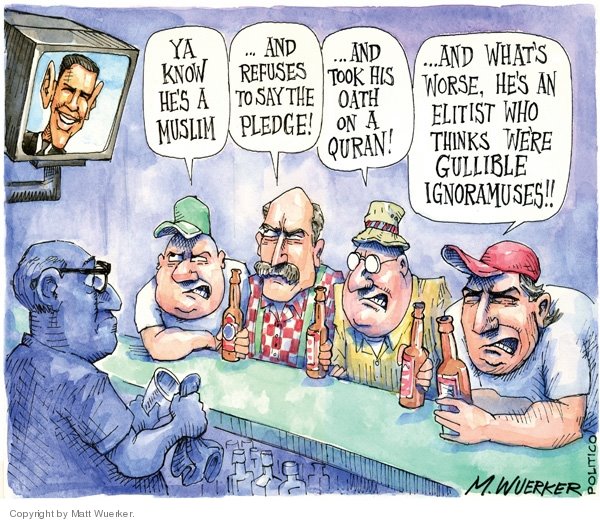 If you liked this, you might also like these related posts:
This was written by Iron Knee. Posted on Monday, August 25, 2008, at 10:42 am. Filed under Irony. Tagged McCain. Bookmark the permalink. Follow comments here with the RSS feed. Both comments and trackbacks are currently closed.