Cindy McCain may still be a drug addict

I posted this story back in June, but there are new developments. Tom Gosinski, who was fired from the charity run by Cindy McCain when he found out that Cindy was obtaining drugs using illegal prescriptions in his name, has finally decided to talk. According to Gosinski, John McCain used his Senate staff and resources to cover up Cindy’s drug use, including getting her a diplomatic passport so her bags would not get searched by customs. 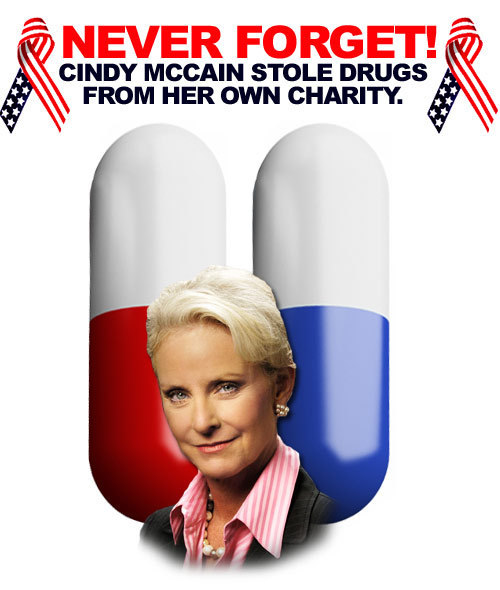 Gosinski previously stayed quiet out of fear, but changed his mind after a recent fight against cancer. Gosinski decided that if he can beat cancer, he can go on record about this.

And remember, whether or not Cindy McCain was a drug addict or stole drugs is not in question — she admitted both. The big questions are: why was she never charged with any crime, how much was her husband involved, and is she still abusing drugs today? This would not be the first time that Cindy lied about kicking the habit.

UPDATE: Sorry, I’ve had to turn off comments on this post. Apparently the word “drug” in the title was like honey to the spambots.

This was written by Iron Knee. Posted on Thursday, September 11, 2008, at 9:06 pm. Filed under Hypocrisy. Tagged McCain. Bookmark the permalink. Follow comments here with the RSS feed. Both comments and trackbacks are currently closed.