As goes the economy, so goes McCain — down: 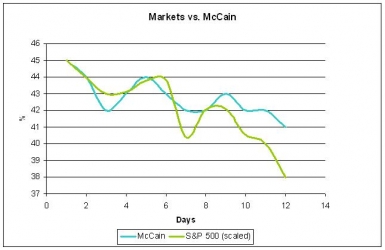 From Steve Lombardo in Pollster.com:

The past 14 days have transformed this election. The financial crisis has catapulted Obama into the lead both nationally and in key states. We have been saying for six months that the political environment has favored the Democrats significantly, but it took a near global financial meltdown for things to finally reach the tipping point. The economic situation has virtually ended John McCain’s presidential aspirations and no amount of tactical maneuvering in the final 29 days is likely to change that equation.

If you liked this, you might also like these related posts:
This was written by Iron Knee. Posted on Saturday, October 11, 2008, at 8:20 am. Filed under Irony. Tagged Economy, McCain. Bookmark the permalink. Follow comments here with the RSS feed. Both comments and trackbacks are currently closed.