“Nice to have you all here. As you all know, George Bush is no longer president, so there’ll be no monologue.” -Jay Leno

“Yesterday, in San Francisco, someone replaced all the street signs on Bush Street with signs that say Obama Street. Locals say it doesn’t really matter because every street in San Francisco goes both ways.” -Conan O’Brien

“Actually, after going to ten inaugural balls last night and dancing more than Cloris Leachman in nine weeks of ‘Dancing With the Stars,’ the new president was up and in the office at 8:35 in the morning and then he was at church at 9:30. Is it a good sign that after one hour of being president, he decided the best thing he could do for the country is pray?” -Jimmy Kimmel

“And during his inaugural address yesterday, President Barack Obama said, ‘Millions of Americans have lost their homes and some of us who still have homes have their mother-in-laws moving in with them.'” -Jay Leno

“Today, in one of his first official acts as president, Barack Obama had an emergency meeting with his top economic advisors to find out just, you know, what the situation is. And, apparently, it didn’t go well, because after the meeting, Obama sold North and South Dakota.” -Conan O’Brien 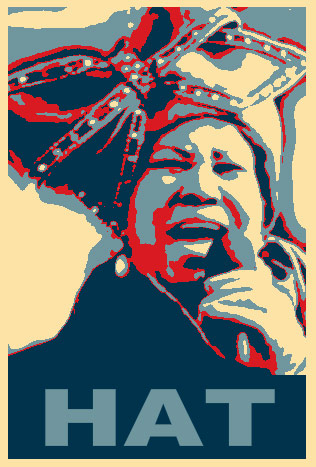 “Last night, while their parents were at the inaugural balls, Sasha and Malia Obama, the kids, had their own little party at the White House. They held a scavenger hunt for them and some other kids. And this is the best thing. At the end of the scavenger hunt, they opened door and in a closet waiting for them were the Jonas Brothers. True. I guess they did the same thing with the Bush twins back in 2000, only it was Motley Crue with a tray of Jell-O shots in the closet.” -Jimmy Kimmel

“Two million people attended the inauguration, compared to less than 500,000 when Bush was inaugurated four years ago. But that makes sense because four years ago, you know, people had jobs to go to.” -Jay Leno

“And there was a stumbling during the reading of the oath, when the chief justice of the Supreme Court, John Roberts, forgot the words for a second and then he got them in the wrong order. See, how typical is that? Barack, just a second before he takes over, the Republicans get one last screw up in there.” -Jay Leno

“Yesterday, at Barack Obama’s inauguration, he was sworn in on an old Bible that was used by Abraham Lincoln. Yeah, and the weird part is, Lincoln checked the Bible out of a library. There are $73,000 in late fees.” -Conan O’Brien

“The total cost of the inauguration was $170 million. They say this is the most of the expensive celebration since that last AIG retreat on our bailout money.” -Jay Leno

“And yesterday had the largest gathering of celebrities for any inauguration ever. In fact, there were so many celebrities and politicians together, it broke the old record set by the Betty Ford Clinic.” -Jay Leno

“And Michele Obama’s inaugural ball gown, which she wore during the first dance — beautiful gown — was created by a designer with the last name of Wu, which is a great name for a designer, isn’t it? Because when you walk in, people go ‘woo!’ You know, Wu is so much more fortunate than that other designer, Elliott Eh.” -Jay Leno

“And at the congressional luncheon held after he took office, President Obama asked lawmakers to reflect on what we know is in the hearts of the American people. Turns out, it’s grease, fat, and lots of cholesterol.” -Jay Leno

“Yesterday, when President Bush returned to Texas, people who were there to greet him were holding up signs that said, ‘You made us so proud.’ Afterwards, the people admitted that the store was out of ‘You totally embarrassed us’ signs.” -Conan O’Brien

“President Bush is back in Texas, unemployed like much of the rest of America. Bush reportedly spent the day cataloging his papers, outlining his memoirs, and sketching out plans for his presidential library. Just kidding. He spent four hours seeing how many Reese’s Pieces he could hold between his toes. 38, it turns out.” -Jimmy Kimmel

“Treasury secretary nominee Timothy Geithner apologized to Congress today for not paying his taxes. And Wesley Snipes said, ‘Why didn’t I think of that? Hey, I’m sorry.” -Jay Leno

“Geithner testified to the Senate Finance Committee today that his failure to pay taxes was just a ‘careless mistake.’ See, remember it was an honest mistake last week, now it’s a ‘careless mistake.’ He says he does his own taxes and he just made a mistake. Well, that’s great. So the guy who’s going to be in charge of the IRS is not a criminal, phew, just incompetent.” -Jay Leno

“Today, millions of people leaving Washington following Tuesday’s inauguration. Actually, so many people are trying to leave that all the Amtrak trains are sold out. So, apparently, Barack Obama can work miracles.” -Conan O’Brien

“President Obama got his new limousine. It has all the latest technology, although they did take out President Bush’s favorite piece of technology, the PlayStation.” -Craig Ferguson

“The new season of ‘Lost’ kicked off tonight. If you haven’t seen it, ‘Lost’ is about a group of desperate people out of touch with the world. It’s based on the true story of the Republican Party.” -Craig Ferguson