I’ve become convinced that how our Representatives in Congress vote on the issue of a public option for health insurance is as good a measure of corruption as we are likely to see. In other words, if your congress critter votes against the public option (or attempts to water it down), you can easily figure out if they are merely doing the bidding of their craven multinational corporate overlords who bought and paid for them. This is especially true of Democrats.

There are four main reasons why your representatives vote for or against a bill. Some take the role of “Representative” seriously, and will vote the way their constituents tell them to vote. Some may vote along with their political party. Alternatively, some might vote according to their personal ideology, even if it disagrees with a majority of their constituents. And finally, some are corrupt, and just sell their vote to the highest bidder.

So how can you tell if your representative is corrupt? In the case of the public option, we may be able to figure this out because we have reasonably good ways to measure the other three motivations for a vote.

Just these two facts point to a healthy (pun intended) amount of corruption in Congress — but you already knew that Congress is corrupt. But to have a situation where an overwhelmingly popular president is doing everything he can to push a public option, which is overwhelmingly supported by the voters, along with plenty of evidence from other countries that publicly run health insurance lowers costs and improves care (not to mention that we are the only industrialized nation that doesn’t provide some level of health insurance for all of its citizens), and yet Congress is coming up with just about every excuse to vote against it, has got to have even the most jaded Congress-watcher shaking their head in disgust.

But I promised you a way to tell if your representative is corrupt, so we come to some beautiful statistical work by Nate Silver, who produced the following graph: 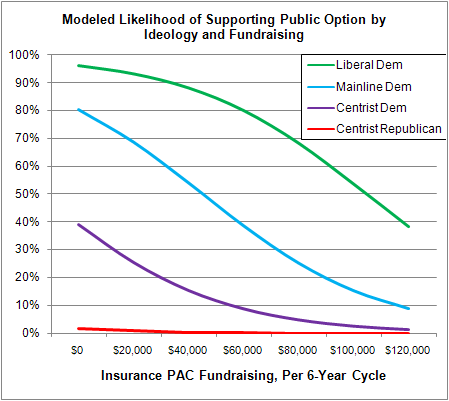 What Silver did was a standard logistic regression, charting a representatives likelihood of voting for the public option against the amount of campaign money they have received from the Insurance PAC in the last 6 years, while holding ideology constant. What is interesting here is that regardless of ideology, receiving PAC money correlates strongly (95%) with opposition to a public option, but it is strongest among mainline Democrats.

A common problem with graphs like this is that correlation does not imply causation. You could argue that the reason why the Insurance companies gave money to a representative was because he was already against a public option. But since we have lots of data on how ideology affects support for a public option, and since Silver has held ideology constant in his analysis, he has largely accounted for this.

So what does Silver’s analysis tell us? For starters, “PAC money spent on Republicans is completely wasted insofar as the public option goes.” Republicans are going to vote against a public option, just because Obama is for it.

Silver even calculates whose vote will likely be most influenced by receiving money from the Insurance industry. So go read his list, and if your representative is on it, and they vote against the public option, that is a very strong indicator that they are bought and paid for by the insurance industry.

Note that some may argue that representatives who vote in favor of a public option can still be corrupt. After all, most of the public would actually prefer a single-payer system (and simply rid us of private health insurance companies) but even Obama refuses to let people even discuss single payer. So this test can tell only if a representative is corrupt, and can’t help you determine if your representative is not.

If you liked this, you might also like these related posts:
This was written by Iron Knee. Posted on Wednesday, June 24, 2009, at 12:14 am. Filed under Irony. Tagged Health. Bookmark the permalink. Follow comments here with the RSS feed. Both comments and trackbacks are currently closed.