The Hypocrisy of Mark Sanford

The latest installment of the Mark Sanford saga is that in his original confession about his lover in Argentina, he, uh, failed to tell the entire truth (he lied). Now he wants to “lay it all out” (as he inconveniently put it) and has added several additional romantic liaisons with his girlfriend that he failed to mention in his earlier confession, plus admitting that he has “crossed the lines” with other women in the past.

Which begs the question: was he doing any of that crossing of lines back in 2002 when he made this campaign ad?

When is a politician’s cheating on his wife newsworthy? When he makes it newsworthy by shamelessly using his family in sanctimonious campaign ads like this one, about “Christian Values, Character, Honesty”, and “Keeping your Word”. 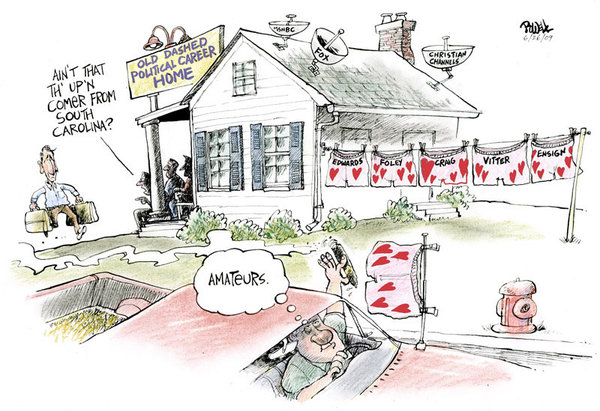 UPDATE: More hypocrisy. Rudy Giuliani went on Morning Joe today to talk about Sanford’s infidelity. Yes, Giuliani the “serial adulterer”, the man who procured city jobs for his mistresses. What did Giuliani want to talk about? You guessed it, Bill Clinton. They managed to avoid talking about Giuliani’s affairs for the entire show. And by the way, the host of Morning Joe recently complained of a “double standard” in the way that politicians who have affairs are judged, insisting that Republicans are treated more harshly than Democrats. Bullshit.

If you liked this, you might also like these related posts:
This was written by Iron Knee. Posted on Wednesday, July 1, 2009, at 1:24 pm. Filed under Hypocrisy. Tagged Republicans. Bookmark the permalink. Follow comments here with the RSS feed. Both comments and trackbacks are currently closed.