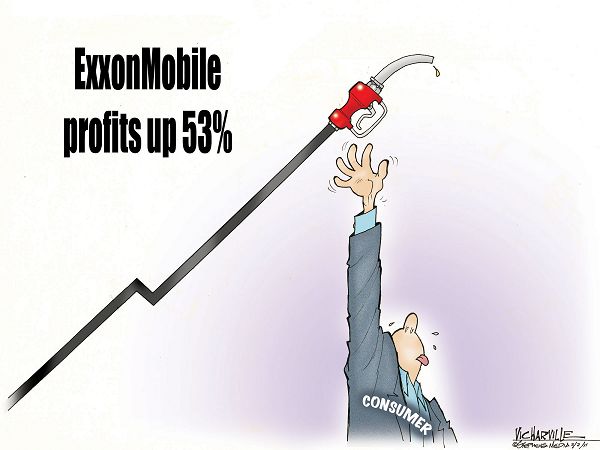 The largest American oil company, Exxon Mobil, recently announced that their profits for the fourth quarter of 2010 had increased by a staggering 53%. This was in line with strong increases in profits of other large energy companies, largely due to rising oil prices.

But it gets worse. Oil prices are continuing to rise, pushed by fears that unrest in Egypt and other middle eastern countries may cause shortages, especially if the Suez canal is shut down. So while your pocketbook is taking a beating at the gas pump, and Egyptians are being beaten by police on the streets, big oil is profiting — big time.

If you liked this, you might also like these related posts:
This was written by Iron Knee. Posted on Saturday, February 5, 2011, at 6:55 am. Filed under Irony. Tagged Oil. Bookmark the permalink. Follow comments here with the RSS feed. Both comments and trackbacks are currently closed.