Obama taught constitutional law in Chicago, and campaigned on making respect for the rule of law one of the cornerstones of his presidency. He also promised to end the excesses of the Bush administration’s war on terrorism and increase government transparency.

And yet, his actions say otherwise. His administration has gone after whistleblowers with a vengeance, most notably Army Private First Class Bradley Manning. In fact, many legal scholars, including Laurence Tribe, who taught constitutional law to Obama at Harvard and was a legal advisor to the Obama administration until three months ago, think that the government’s treatment of Manning is illegal, unconstitutional, and could even be considered torture.

Tribe, along with more than 250 of our country’s top legal scholars have signed a letter protesting Obama’s treatment of Manning, who has been held at a military base since July and is facing a court martial on charges that he leaked classified information. The harsh treatment of Manning has also been denounced by human rights groups, including Amnesty International, and is being investigated by Congressman Dennis Kucinich and by UN Special Rapporteur on torture Juan Mendez to see if it violates US and international rules concerning the treatment of prisoners. But the military has not allowed any of them to visit with Manning without supervision and monitoring, which means that anything Manning says could be used against him during this trial.

This is the kind of treatment we used to denounce in totalitarian governments like the USSR. Things have gotten so bad that even China is criticizing US human rights abuses, and getting away with it. When did we lose the moral high ground? 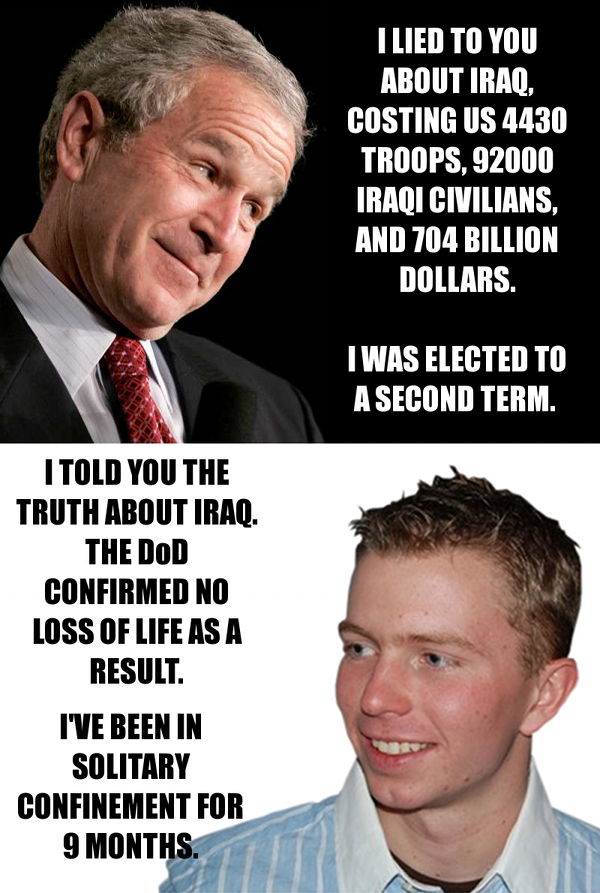 If you liked this, you might also like these related posts:
This was written by Iron Knee. Posted on Wednesday, April 13, 2011, at 8:47 am. Filed under Hypocrisy. Tagged Torture. Bookmark the permalink. Follow comments here with the RSS feed. Both comments and trackbacks are currently closed.