Who says Republicans don’t care about the poor? 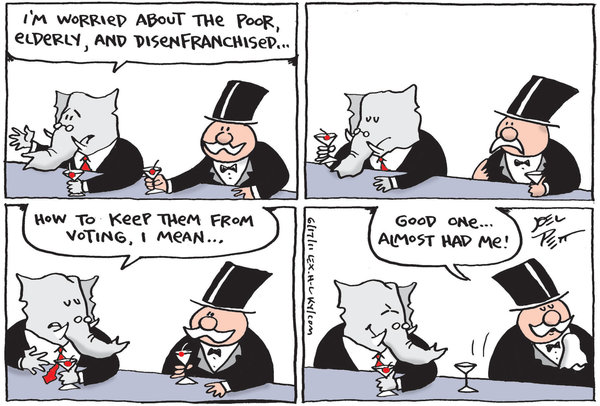 Republicans made huge gains in the 2010 elections, promising to improve the economy. Isn’t it funny that the economy is now going back down? What isn’t funny is that 33 states — all with Republican controlled legislatures — have passed laws that make it more difficult to vote.

How can you tell that these laws are politically motivated? Well, in Texas, you can use a concealed handgun permit to identify yourself to vote, but you can’t use a student ID. And in Florida, they also restricted efforts by the League of Women Voters to register new voters. Proponents say the new laws are necessary to prevent voter fraud, but election law experts say that there is little evidence of voter fraud in US elections.

This was written by Iron Knee. Posted on Monday, June 20, 2011, at 12:49 am. Filed under Humor. Tagged Elections, Republicans. Bookmark the permalink. Follow comments here with the RSS feed. Both comments and trackbacks are currently closed.