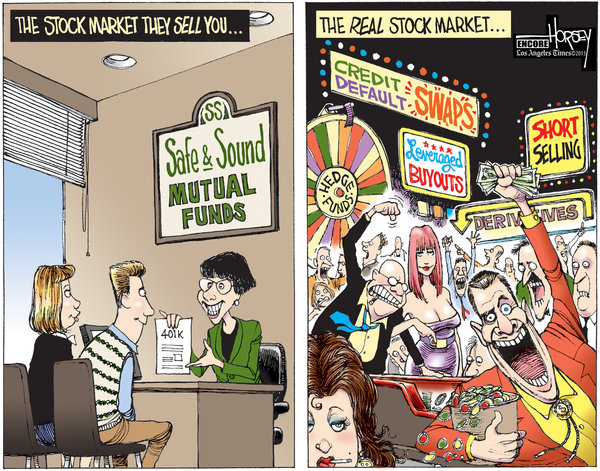 [Notes about the comic by David Horsey]

When are America’s leaders going to step up and protect us from the most threatening terrorists, hedge fund managers?

Sure, some Islamist nutcase might be able to set off a bomb on a bus or in a building, but, horrific as that may be, the damage to our society is not nearly as great as the wrecking ball that can hit us all when one of the greedy schemes of aggressive and unscrupulous financiers goes awry. Yes, Islamic terrorists took down the World Trade Center in 2001, but the financial terrorists took down the world economy in 2008.

Vast new wealth is being manufactured from thin air by the financial sector, and almost all of that wealth goes to the very few hedge fund managers, derivatives traders and other money manipulators who operate in a world of their own creation with scant regulation and no sense of obligation to society. The rest of us only get hooked into this bigger game when the guys in high finance screw up, drive the economy over a cliff and drag everyone down with them.

Right now, we are in a period of recovery from the 2008 financial disaster. Finally, there are more jobs for more people. But, structurally, nothing much has changed. We still live at the mercy of the financiers, and it is hard to imagine that they will not blow everything up again, unless someone steps in to stop their kind of terrorism.

It is a good sign that a crew of hedge fund managers from SAC Capital Advisors has been indicted for insider trading. Finally, someone has taken a shot across the bow of their pirate ship. But it will take far more to scare off this gang of buccaneers. There is just too much money to be made.

As Ted Siedle wrote in a recent column for Forbes, “There have always been scammers in the money management industry but hedge funds, with outrageous fees and compensation structures, are money management on steroids. The abuses related to the staid world of traditional investing, a percent or two here and there, are chump-change compared to brazen hedge fund gouging.

If you liked this, you might also like these related posts:
This was written by Iron Knee. Posted on Monday, September 2, 2013, at 10:28 pm. Filed under Irony. Tagged Wall Street. Bookmark the permalink. Follow comments here with the RSS feed. Both comments and trackbacks are currently closed.