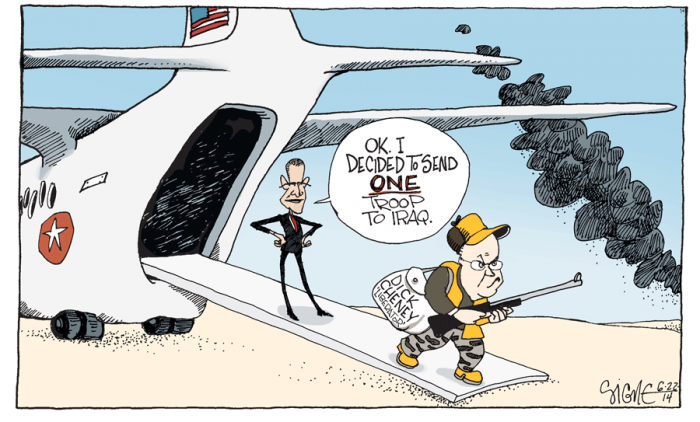 Ironically, Dick Cheney wrote that editorial with his daughter Liz, whose birth conveniently provided him with a draft deferral. Isn’t it time?

Then we will see if he is greeted as a liberator!

UPDATE: Civil war seems to be breaking out in the Republican party. Senator Rand Paul (R-KY) said yesterday that people like Dick Cheney who blame the president for the current violence should take a look in the mirror. Paul says we need to ask the people who supported the 2003 invasion of Iraq “Were they right in their predictions? Were there weapons of mass destruction there? Was the war won in 2005, when many of those people said it was won?”

In turn, Cheney strikes back: “Rand Paul, with all due respect, is basically an isolationist. He doesn’t believe we ought to be involved in that part of the world. That didn’t work in the 1930s, it sure as heck won’t work in the aftermath of 9/11, when 19 guys armed with airline tickets and box cutters came all the way from Afghanistan and killed 3,000 of our citizens.”

Cheney tries to deflect criticism of his handling of Iraq when he was vice president by saying “I was a strong supporter then of going into Iraq, I’m a strong supporter now. Everybody knows what my position is. There’s nothing to be argued about there. But if we spend our time debating what happened 11 or 12 years ago, we’re going to miss the threat that is growing and that we do face.”

Personally, I think it is he who is stuck in the past, bringing up 9/11 as a justification for stupid wars, when there was absolutely no connection between 9/11 and Iraq. Not to mention how his administration bungled 9/11 itself.

If you liked this, you might also like these related posts:
This was written by Iron Knee. Posted on Monday, June 23, 2014, at 12:30 am. Filed under Irony. Tagged Iraq. Bookmark the permalink. Follow comments here with the RSS feed. Both comments and trackbacks are currently closed.