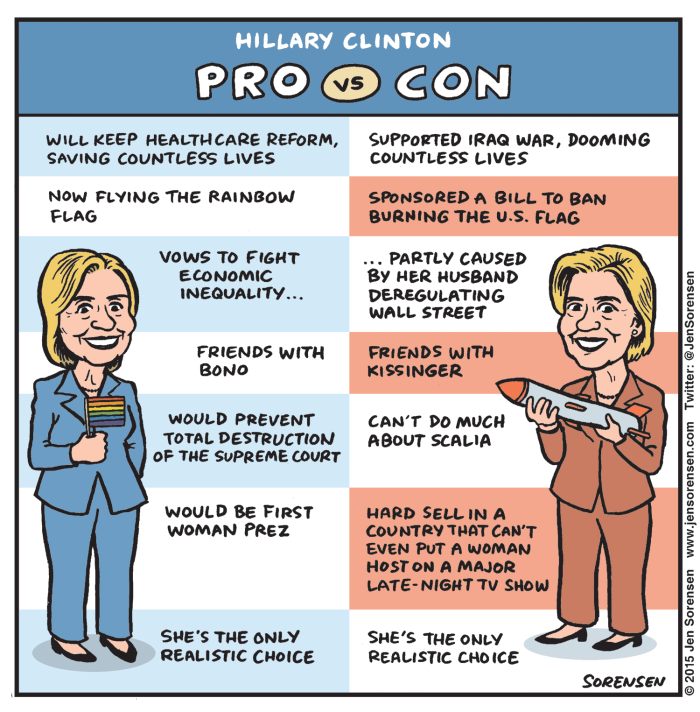 I have to admit that I was never a big fan of Bill Clinton, and in 2008 I supported Barack Obama over Hillary Clinton. But I think I actually feel better about Clinton being president now. I saw her speak and answer questions a few months ago, and was more impressed. I think her experience in the Senate and in Obama’s administration made her more relaxed and realistic.

Of course it helps that the only alternative will be someone who survives the “stupider than thou” Republican primary. I also think Hillary Clinton has more experience dealing with the Party of No. Her and Bill’s ability to triangulate might just stand a chance of breaking apart the Republican unholy coalition of social conservatives and greedy corporations, even if just by winning over the greedy corporations.

And as this comic puts it, she is the only realistic choice.

If you liked this, you might also like these related posts:
This was written by Iron Knee. Posted on Thursday, April 16, 2015, at 12:30 am. Filed under Irony. Tagged Elections. Bookmark the permalink. Follow comments here with the RSS feed. Both comments and trackbacks are currently closed.