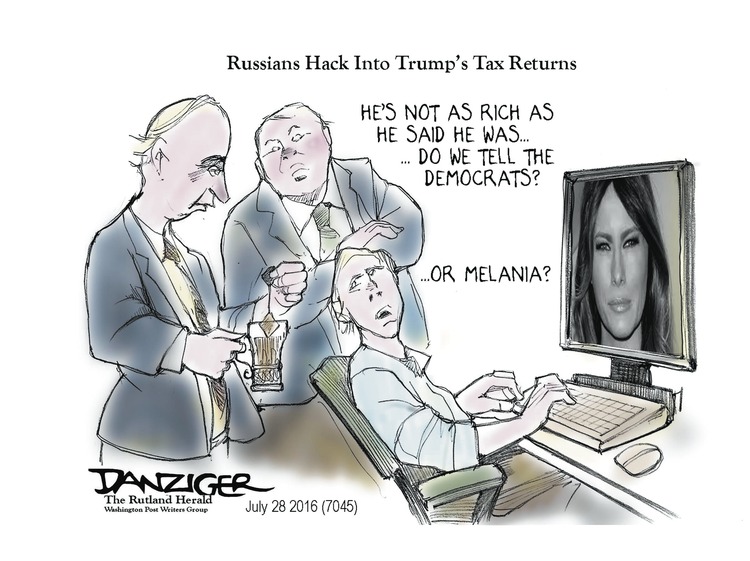 Somebody has to have hacked into Donald Trump’s tax returns by now. But I guess WikiLeaks is too busy leaking DNC emails showing that the Democrats weren’t nice to Sanders. Maybe potential evidence that Trump is a pawn of the Russians is less interesting to them.

Meanwhile, Trump continues to be in the pocket of the Russians. On TV on Sunday, Trump was asked about Vladimir Putin’s designs on the Ukraine. His response stunned his interviewer, George Stephanopoulos:

Trump apparently isn’t aware (or forgot) that Russia already invaded the Ukraine in 2014 (not that long ago!) and took Crimea from them by force. So Russia is already occupying part of the Ukraine.

Trump attempted damage control today, tweeting that he meant that Putin would not going into the Ukraine if he were president. But that doesn’t make sense either, since Putin is already in the Ukraine and will certainly still be there even if Trump is elected.

Stephanopoulos also asked Trump about his repeated claims that he has a personal relationship with Putin. For example, in one of the Republican primary debates, Trump said of Putin “I got to know him very well because we were both on ’60 Minutes,’ we were stablemates.” But now Trump has changed his story. He replied to Stephanopoulos:

Trump also agreed with Putin’s argument that he was justified in seizing the Crimea by force, saying “I’m going to take a look at it. But you know, the people of Crimea, from what I’ve heard, would rather be with Russia than where they were.” And Trump has recently said that he might not do anything if Russia invaded our NATO allies.

This was written by Iron Knee. Posted on Monday, August 1, 2016, at 8:33 am. Filed under Irony. Tagged Russia, Trump. Bookmark the permalink. Follow comments here with the RSS feed. Both comments and trackbacks are currently closed.