The Other Shoe Drops

Criminal prosecutors in the Ukraine investigating corruption have found the name of Paul Manafort, the man running Trump’s campaign, 22 times (for a total of $12.7 million) on a secret ledger of people who were given large amounts of cash as bribes and paybacks.

This blog has mentioned previously that Manafort worked for Viktor Yanukovych, the leader of the Ukrainian pro-Russian political party who fled to Russia after he was deposed. Manafort also worked with Oleg Deripaska “a close ally of President Vladimir V. Putin“.

In response, Manafort attacked the NY Times, but did not deny his connections to Russia.

Trump’s ex-campaign manager Corey Lewandowski, who was pushed out by Manafort, tweeted a link to this story moments after it broke. Lewandowski still advises Trump personally and often speaks on the phone with him.

One thing is clear — in a normal election Manafort would never have been hired to run a presidential campaign. As a Fox News contributor put it “The fact that Trump has started receiving security briefings and that Manafort may have access to them is not a joke.”

A Republican strategist tweeted “If Manafort truly cares about Trump, he resigns by 8am tomorrow.” But a speechwriter for former president George W. Bush replied “Assuming it is Trump to whom Manafort ultimately answers. But that’s a question now, isn’t it?”

The former director of the Richard Nixon presidential library (and distinguished historian at NYU) asks “How demonstrably Putanist does Manafort have to be for the RNC to insist Trump dump him?”

Amazing how far the Republican Party has come, from celebrating Ronald Reagan for standing up to Russian leader Mikhail Gorbachev, to nominating Donald Trump, who kisses Putin’s ass.

It is undeniable that Trump has become cozy with Putin since hiring Manafort. Just last Thursday, Trump told CNBC (in the third person) “During his administration, Trump will be friendly with Putin”. Trump made excuses for Russia’s occupation of Crimea (formerly a part of the Ukraine) and even weakened language in the Republican plaform that called for military support for the Ukraine. Trump also suggested that as president he would not defend NATO allies if they were invaded by Russia. Trump has hired blatantly pro-Putin advisors. And there is growing evidence that Putin is trying to sway the outcome of the US election, as he has done in European elections.

Putin was a career intelligence officer, trained to identify vulnerabilities in an individual and to exploit them. That is exactly what he did early in the primaries. Mr. Putin played upon Mr. Trump’s vulnerabilities by complimenting him. He responded just as Mr. Putin had calculated.

Mr. Putin is a great leader, Mr. Trump says, ignoring that he has killed and jailed journalists and political opponents, has invaded two of his neighbors and is driving his economy to ruin. Mr. Trump has also taken policy positions consistent with Russian, not American, interests — endorsing Russian espionage against the United States, supporting Russia’s annexation of Crimea and giving a green light to a possible Russian invasion of the Baltic States.

In the intelligence business, we would say that Mr. Putin had recruited Mr. Trump as an unwitting agent of the Russian Federation.

And of course, because Trump has not released any of his tax returns, we have no idea of how much money Trump has taken from the Russians, either personally or as investments in his projects. 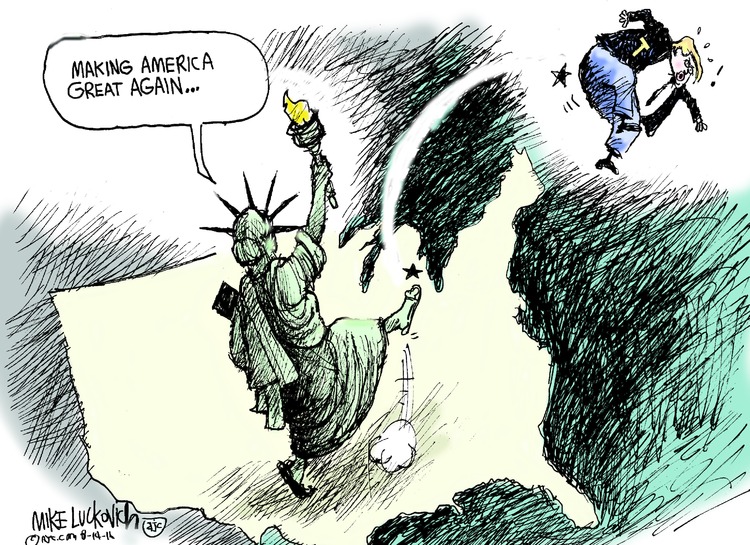 If you liked this, you might also like these related posts:
This was written by Iron Knee. Posted on Tuesday, August 16, 2016, at 12:30 am. Filed under Hypocrisy. Tagged Corruption, Terrorism, Trump. Bookmark the permalink. Follow comments here with the RSS feed. Both comments and trackbacks are currently closed.