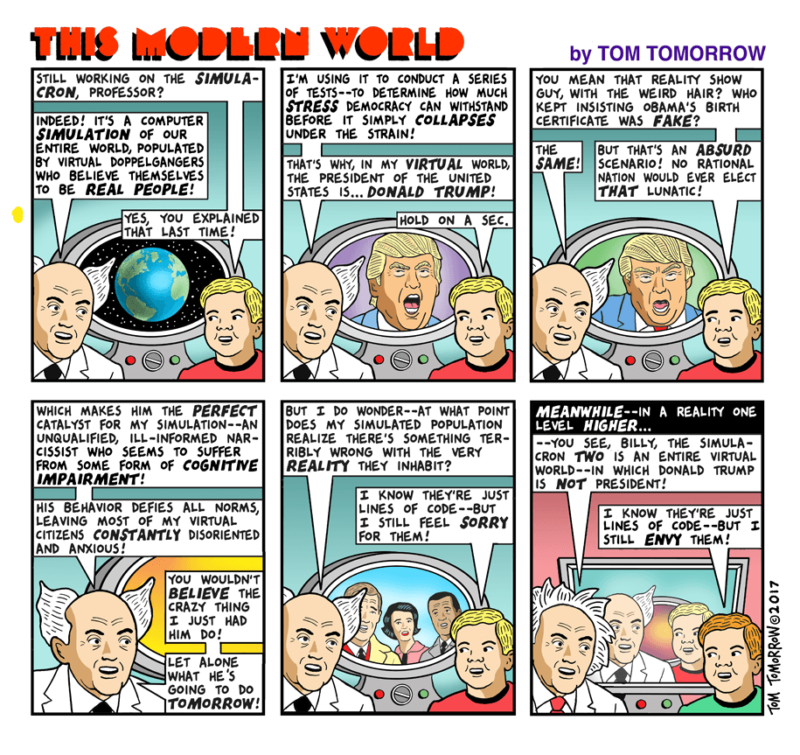 Don’t you wish the Trump presidency was really just a computer simulation?

Here’s evidence that it might be. Donald Trump is now claiming (and tweeting) two contradictory things:

Trump sometimes says both of these things in the same day. For example, in one day he said that it is his opinion “that many of the leaks coming out of the White House are fabricated lies made up by the #FakeNews media”, and two hours later he said that the prime minister of the United Kingdom was mad about information that was leaked.

If the leaks are “fabricated lies” then why would the UK be upset about them? Trump wants to have it both ways: The leaks are prevarications by the press, but we have to track down the leakers inside the government and prosecute them.

As the comic says, no rational person would ever vote for that lunatic.

[Side note: I wonder if Dan Perkins (the real name of Tom Tomorrow) is a Doctor Who fan.]

If you liked this, you might also like these related posts:
This was written by Iron Knee. Posted on Tuesday, May 30, 2017, at 9:10 am. Filed under Hypocrisy. Tagged Lies, Media. Bookmark the permalink. Follow comments here with the RSS feed. Both comments and trackbacks are currently closed.