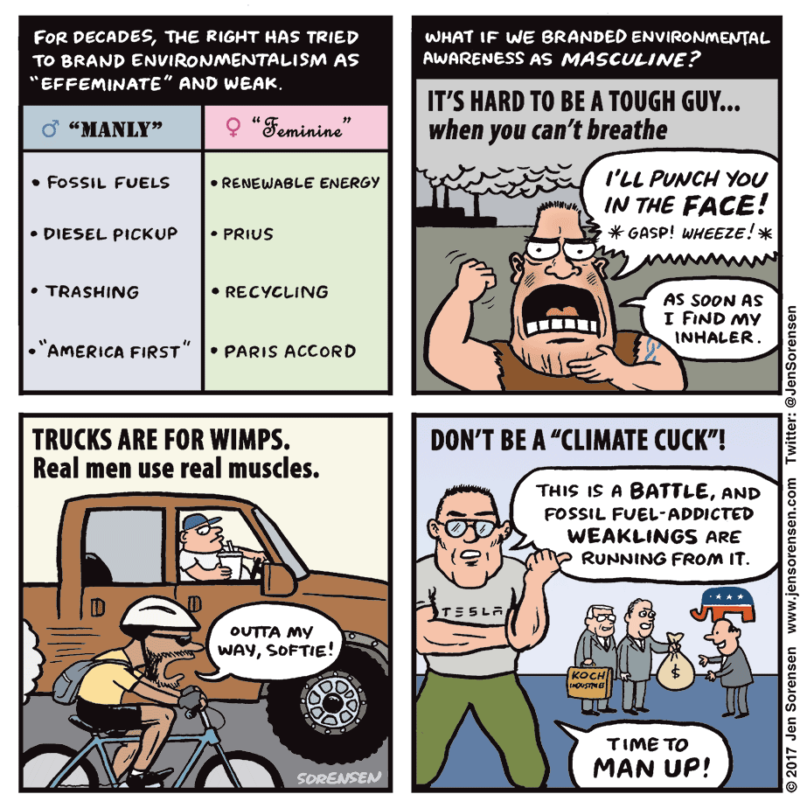 Jen Sorensen has some great commentary to go with her hilarious comic:

Most people seem to get the sarcasm of this cartoon, but I’d like to be clear that my intention is to neither deprecate the “feminine” nor celebrate hyper-masculinity. I’ve been wanting to write a comic for a while about how virtually everything is gendered, especially when it comes to political rhetoric. Trump’s statements about climate change (and, well, lots of other things too) are loaded with manly-man dog whistles. Which is ironic, considering that Trump is hardly a chiseled specimen of manhood — the low-energy duffer had to ride in a golf cart behind European leaders as they walked a short distance. The thing is, a large swath of the American electorate is, unfortunately, swayed by tough talk — however stupid — and a fear of being perceived as weak or female. And I’m afraid that to reach those people, you may need to “speak their language” to some extent, by appealing to ideas of toughness. But toughness should not be understood as necessarily male. Caring for the planet we inhabit is a form of strength, virtue, and personal responsibility, qualities that can apply to men and women equally. Incidentally, I wouldn’t go so far as to call Republicans “climate cucks” in real life, as that particular term has problematic alt-right origins, and I use it satirically here. But climate weaklings? Hell yeah.

It’s true. Donald Trump likes to play the tough guy, who never apologies, never backs down, and doubles down even when he is totally wrong.

Like that’s not a recipe for disaster for someone with the nuclear codes.

If you liked this, you might also like these related posts:
This was written by Iron Knee. Posted on Monday, June 12, 2017, at 12:21 am. Filed under Humor. Tagged Environment, Sexism. Bookmark the permalink. Follow comments here with the RSS feed. Both comments and trackbacks are currently closed.