The Republicans have never tried to hide the fact that they are doing everything they can to sabotage the Affordable Care Act (Obamacare). Their hysterical campaign has included a barrage of frivolous lawsuits, purposely driving insurance firms out of markets, withholding reimbursements that were promised by the law, and rendering the individual mandate toothless. And their sabotage has continued despite the fact that Obamacare has steadily become more popular and is supported by a majority of Americans. And unlike the dramatic rate increases of the past, health insurance companies are actually talking about reducing rates for 2019.

And Republicans keep claiming that Obamacare is a socialist takeover of our healthcare system, even though it is nothing of the sort. They willfully ignore that the blueprint of the ACA was first drawn up by the conservative Heritage Foundation, and first implemented by Republican Mitt Romney when he was governor of Massachusetts. Yes, that’s right, the Republicans came up with and supported the idea of an individual mandate.

But what Republican sabotage has done is to convince Democrats that a market-based solution like the ACA is simply too vulnerable to right-wing sabotage. So the only safe path to providing health insurance to more people is through public programs, since public programs like Medicare have not only succeeded and are very popular, they have resisted Republican attempts to sabotage them.

So the irony is that the right wing as been completely oblivious to how their uncompromising stand has actually strengthened the case for more left-wing health-care reforms, while undermining the basis for more moderate ones (which were originally conceived of by conservatives).

Next step? Medicare for all! After all, Donald Trump did promise healthcare coverage for everyone. 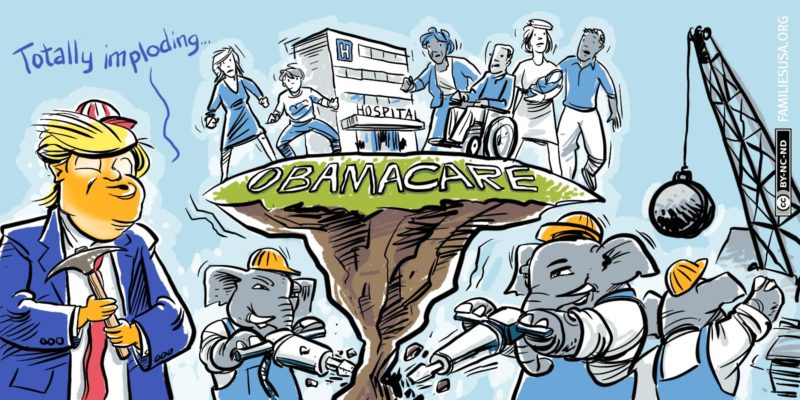 If you liked this, you might also like these related posts:
This was written by Iron Knee. Posted on Sunday, September 16, 2018, at 7:13 am. Filed under Irony. Tagged Health, Obamacare. Bookmark the permalink. Follow comments here with the RSS feed. Both comments and trackbacks are currently closed.