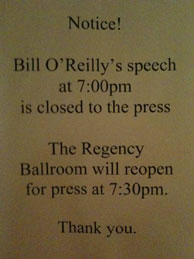 We already reported on Mitt Romney doing a full flip-flop at the Values Voter Summit earlier this month, but we almost forgot this little gem.

At the summit, Bill O’Reilly received a “Media Courage Award” from the right-wing Family Research Council. But you might not have heard about it, because the award ceremony (including the acceptance speech) was closed to the media.

But what makes this really bizarre is that the announcement of the award says it is being awarded because of O’Reilly’s coverage of Doctor George Tiller, an abortion provider who was murdered (while attending church) by an anti-abortion extremist. Before Tiller’s murder, O’Reilly repeatedly called him “Tiller the Baby Killer” and “Dr. Killer” and said that anyone who didn’t stop Tiller “has blood on their hands”.

What kind of courage does it take to incite murder?

If you liked this, you might also like these related posts:
This was written by Iron Knee. Posted on Monday, September 28, 2009, at 1:18 pm. Filed under Hypocrisy. Bookmark the permalink. Follow comments here with the RSS feed. Both comments and trackbacks are currently closed.