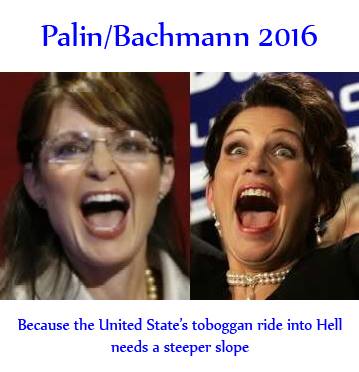 Darn it! I have been SOOO good about not posting articles about Sarah Palin for a long time. At this point I believe it is much better to just ignore her, because she isn’t any kind of elected official anymore and seems to just say bat-shit crazy things to get attention. But this was just too funny.

Michele Bachmann, on the other hand, is still in Congress. The good news is that Bachmann is retiring at the end of this term, however some people think she is doing this so she can run for president. Considering what happened the last time she ran for president, it should be funny, even if she does it without Palin.

UPDATE: I don’t often point out that Michele Bachmann is bat-shit crazy, but when I do… she steps right up and proves me right. Wednesday on a conservative radio talk show Bachmann claimed that gays “want to abolish age of consent laws, which means children would… we would do away with statutory rape laws so that adults will be able to freely prey on little children sexually. That’s the deviance that we’re seeing embraced in our culture today.” 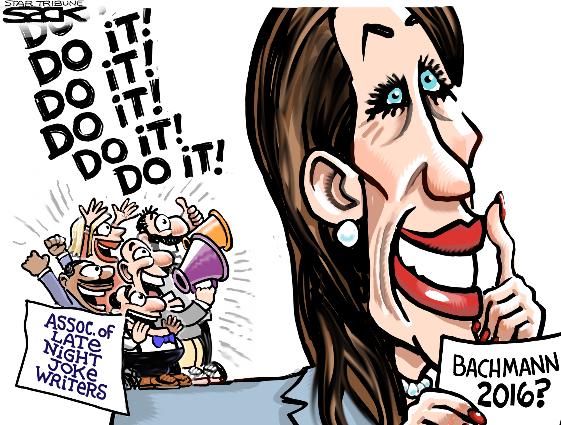 If you liked this, you might also like these related posts:
This was written by Iron Knee. Posted on Friday, July 25, 2014, at 12:30 am. Filed under Humor. Tagged Elections. Bookmark the permalink. Follow comments here with the RSS feed. Both comments and trackbacks are currently closed.