The Meme Machine Collides with Reality

It seems like the Republican strategy recently has been to throw out an enormous number of negative memes about Obama, to see if any stick.

First, they said that he was doing too much. Between cap and trade to roll back global warming, bailing out the economy with the stimulus bill, appointing a hispanic woman to the Supreme Court, negotiating with our enemies, and working on health care reform, he was quickly turning this country socialist.

My favorite tweak about this, however, is “Those Democrats are Outta Control!” in Political Relief. Go read it if you haven’t seen it already.

Never mind that these two memes directly contradict each other. I mean, how can Obama destroy our constitution and turn us into socialist drones if he doesn’t actually accomplish anything? And it is highly ironic that the same people who are accusing Obama of not accomplishing anything are the same people who are violently obstructing everything he does and hinting at armed insurrection if he does accomplish anything. See also the previous post, at the end of Grayson’s rant, where he says that if Obama cured world hunger, the Republicans would blame him for overpopulation, and if he brought about world peace, they would blame him for destroying the defense industry.

As a sign of how quickly these memes get established, here is is a clip from Fox News, where their heads are exploding over the news that Obama has won the Nobel Peace Price. How could he win, when he hasn’t actually accomplished anything?

One of my favorite sayings is that you shouldn’t believe your own PR. Fox News fails.

Fox does get off one good line, when they say that Obama won the Nobel prize for not being Bush. 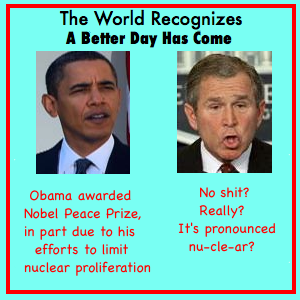 UPDATE: I think the fact that some people are questioning why Obama won says more about the US media than it does about either Obama or the Nobel committee. Most people in the rest of the world (other than right-wingers) know why he won and agree with it — probably because they aren’t listening to our corporate media or teabaggers.

This was written by Iron Knee. Posted on Friday, October 9, 2009, at 11:56 am. Filed under Irony. Tagged Fox News, Media, Obama. Bookmark the permalink. Follow comments here with the RSS feed. Both comments and trackbacks are currently closed.