Madame Speaker, I have words for Democrats and Republicans tonight.

Let’s start with the Democrats

We as a party have spent the last six months, the greatest minds in our party, dwelling on the question, the unbelievably consuming question of how to get Olympia Snowe to vote on health care reform. I want to remind us all that Olympia Snowe was not elected President last year. Olympia Snowe has no veto power in the Senate. Olympia Snowe represents a state with one half of one percent of America’s population.

Let me say this; last week I held up this report here and I pointed out that in America there are 44,789 Americans that die every year according to this Harvard report published in this peer reviewed journal because they have no health insurance. That’s an extra 44,789 Americans who die who’s lives could be saved, and their response was to ask me for an apology.

To ask me for an apology?

That’s right. To ask ME for an apology!

They understand that if Barack Obama could somehow bring about world peace they would blame him for destroying the defense industry.

In fact, they understand that if Barack Obama has a BLT sandwich tommorrow for lunch, they will try to ban bacon.

But that’s not what America wants, America wants solutions to it’s problems and that begins with health care, and that’s what I’m speaking for tonight.

I yield back the balance of my time. 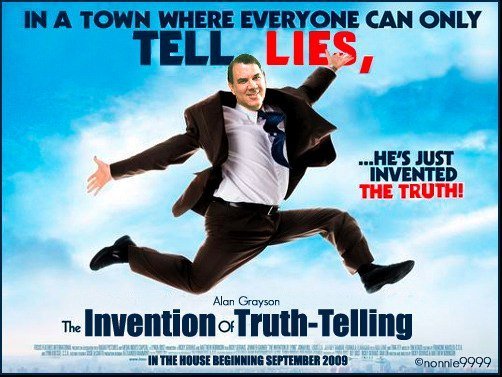 UPDATE: Grayson on Hardball. Someone who thinks Grayson will scare the Democratic establishment to death (plus an interesting video of Grayson). And another short but funny video of Grayson.

This was written by Iron Knee. Posted on Friday, October 9, 2009, at 10:17 am. Filed under Irony. Tagged Congress, Health. Bookmark the permalink. Follow comments here with the RSS feed. Both comments and trackbacks are currently closed.