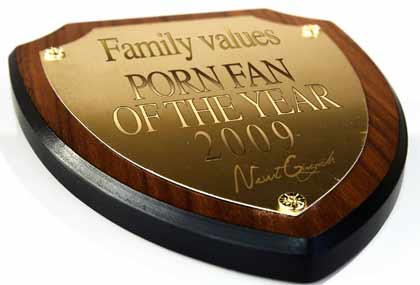 There is no doubt that Gingrich deserves the award, considering his “family values” (as reported by Washington Monthly):

The most notorious of them all is undoubtedly Gingrich, who ran for Congress in 1978 on the slogan, “Let Our Family Represent Your Family.” (He was reportedly cheating on his first wife at the time). In 1995, an alleged mistress from that period, Anne Manning, told Vanity Fair’s Gail Sheehy: “We had oral sex. He prefers that modus operandi because then he can say, ‘I never slept with her.'” Gingrich obtained his first divorce in 1981, after forcing his wife, who had helped put him through graduate school, to haggle over the terms while in the hospital, as she recovered from uterine cancer surgery. In 1999, he was disgraced again, having been caught in an affair with a 33-year-old congressional aide while spearheading the impeachment proceedings against President Clinton.

But the best part is that Vivas plans on sending a followup letter rescinding the award, and offering the explanation that this particular honor was not intended for fans of their (NSFW) “Wife Switch” DVD series.

This was written by Iron Knee. Posted on Wednesday, October 14, 2009, at 6:36 am. Filed under Irony. Bookmark the permalink. Follow comments here with the RSS feed. Both comments and trackbacks are currently closed.