The Birth of a Reversal

Historically, the Catholic Church were the major opponents of birth control. In fact, in 1921 a Catholic Archbishop sent the police to raid a public meeting of the American Birth Control League because it was “indecent”. Birth control was illegal until 1965, when the Supreme Court ruled laws against it were unconstitutional. Once legalized, President Lyndon B. Johnson backed a federal birth control program but was afraid of the Democratic party’s Catholic base, so he didn’t push it.

Believe it or not, Congressman George H. W. Bush (who eventually became our president) led the fight in Congress to establish federal funding for birth control (and thus, funding for Planned Parenthood), earning him the nickname “Rubbers”. His father, Prescott Bush, had been an ardent supporter of Planned Parenthood.

Richard Nixon was another strong supporter of federally funded family planning, and along with Bush, secured the passage of the “Family Planning Services and Population Research Act”. That is where “Title X” funding for family planning comes from, which is still a major source of funding.

That’s right. It was the Republicans who fought for funding of Planned Parenthood.

Sometimes I feel badly because it appears that I am partisan against the Republicans, but I’m really against only the current Republicans, who seem to fight only for greed and corruption, and seem to be held hostage by their radical right. How could anyone believe in the propaganda they now spew out? I would love to see the GOP regain their grandeur, and I would support them.

But meanwhile, here’s a funny button: 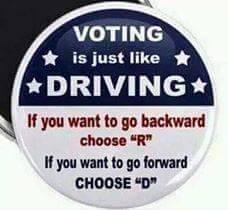 If you liked this, you might also like these related posts:
This was written by Iron Knee. Posted on Monday, October 12, 2015, at 12:30 am. Filed under Irony. Tagged Abortion, Birth Control, Planned Parenthood. Bookmark the permalink. Follow comments here with the RSS feed. Both comments and trackbacks are currently closed.