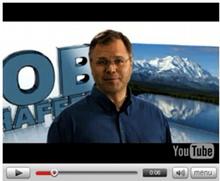 Republican Bob Schaffer is running for the Senate in Colorado. In order to impress voters about his love for Colorado (he’s originally from Ohio), he came out with a TV ad today that touts the fact that he proposed to his wife Maureen at the summit of Pikes Peak. There’s only one problem: in the ad, the mountain shown in the background is not Pikes Peak at all, but Mt. McKinley in Alaska.

This was written by Iron Knee. Posted on Wednesday, May 14, 2008, at 11:14 pm. Filed under Irony. Bookmark the permalink. Follow comments here with the RSS feed. Both comments and trackbacks are currently closed.