On Sunday, the McCain campaign released a list of 30 “prominent democrats and independents” who have joined “Citizens for McCain”. His website claims these are leaders and activists, but you have to wonder if anyone in his campaign actually checked the list before they released it. Take 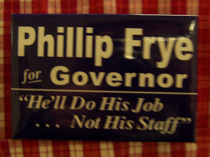 Phillip “Icky” Frye of West Virginia, whose major claim to fame seems to be that his wife had an extramarital affair with then-governor Bob Wise. Yes, it is true that Frye did run for governor after that, but only to embarrass Wise, and he received less than 1% of the vote (Frye works as a TV repairman). The best part of his campaign seems to have been his slogan (see photo).

But the most ironic part of this story is that the McCain campaign actively sought Frye’s endorsement, and defended adding his name to the list, calling him a “prominent Democrat”. Asked how the campaign picked people to be on the list, a spokesman for McCain’s national campaign said “We did research. We reviewed them.” For his part, Frye seems to be enjoying the attention, saying “They asked me to be one of their representatives. We’re in touch, getting some things together. McCain will make some appearances together with us.”

All in all, the list contains no current members of either Congress or of any state legislatures, Democrat or otherwise.

Thanks to the Jed Report.

This was written by Iron Knee. Posted on Tuesday, June 17, 2008, at 9:22 pm. Filed under Humor. Tagged McCain. Bookmark the permalink. Follow comments here with the RSS feed. Both comments and trackbacks are currently closed.