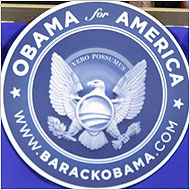 The McCain campaign is attacking Obama because he gave a speech standing behind a seal that looks something like the presidential seal. They also implied that Obama committed a crime — even quoting 18 USC Sec. 713: “Whoever, except as authorized under regulations promulgated by the President and published in the Federal Register, knowingly manufactures, reproduces, sells, or purchases for resale, either separately or appended to any article manufactured or sold, any likeness of the seals of the President or Vice President, or any substantial part thereof, except for manufacture or sale of the article for the official use of the Government of the United States, shall be fined under this title or imprisoned not more than six months, or both.” (emphasis from the McCain campaign). This attack is being picked up by the right-wing blogosphere.

Now, I personally think Obama’s seal is pretty ugly and silly, although I did get a chuckle out of the new latin logo “vero possumus”, which means “yes we can”, but illegal? Well, it took Mark Nickolas at Political Base about 15 minutes on Google Images to find that the National Republican Senatorial Committee uses three different likenesses of the official seal in fundraising. The one I show (at left) is used for people who contribute at least $5,000 annually.

As the Jed Report notes, you don’t have to look very hard to find other people using the presidential seal. For example, the popular TV show “West Wing” sells a boxed set of DVDs of the show with the official seal, embossed in metal, on the cover. The seal has also been used by the satirical newspaper “The Onion” to make fun of Bush’s weekly radio address. Not to mention The Ramones.

This was written by Iron Knee. Posted on Monday, June 23, 2008, at 8:46 am. Filed under Hypocrisy. Tagged McCain, Obama. Bookmark the permalink. Follow comments here with the RSS feed. Both comments and trackbacks are currently closed.