McCain gave a speech last week in Houston to an audience of oil executives, announcing he now supports offshore oil drilling. To justify his flip-flop, he claimed that drilling is now so safe that “not even Hurricane Katrina and Rita could cause significant spillage from battered rigs off the coast of New Orleans and Houston.” You can read the transcript or watch him say it:

Unfortunately, the truth is that it is easy to find many reports of oil spills due to hurricane Katrina. Here’s a story from the Houston Chronicle. In fact, the Katrina oil spills were compared to those from the Exxon Valdez, and were even visible from space: 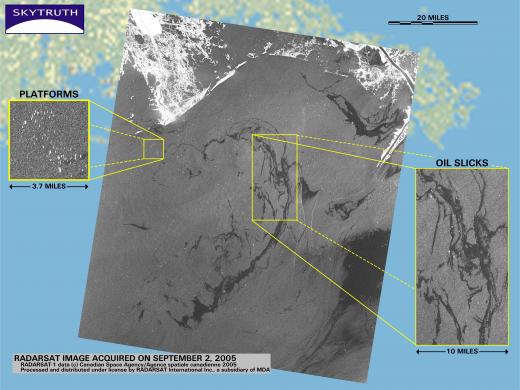 So, does our ever-vigilant media report this error by McCain?  Let’s see what they have to say:

What makes this even worse is that it is a craven, evil lie. The Republicans are trying to convince you that high oil prices are due to environmental regulations that limit off-shore drilling. But Department of Energy figures show that allowing unlimited drilling offshore (and in the Arctic Wildlife Refuge, too) would lower the price of gasoline — are you sitting down? — by less than 6 cents a gallon. And not until the year 2025. Try to imagine how much gas will cost in 2025, and how glad you will be that we mucked up our beaches and wildlife for 6 cents a gallon.

Also note that 79% of America’s offshore oil reserves are not even restricted by those regulations. But the oil companies, and their representatives in Washington, can’t wait to get rid of any remaining environmental restrictions.

If you liked this, you might also like these related posts:
This was written by Iron Knee. Posted on Monday, June 23, 2008, at 3:05 pm. Filed under Hypocrisy. Tagged McCain. Bookmark the permalink. Follow comments here with the RSS feed. Both comments and trackbacks are currently closed.