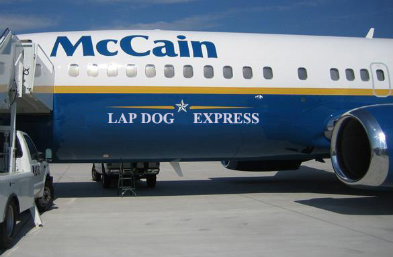 McCain has refurnished his campaign airplane with a special section that is reserved for the “good reporters”. How does a reporter get into the VIP section? “You’ll have to earn it” says campaign aide Mark Salter.

It looks like McCain’s strategy is working, with a number of sycophant reporters falling all over themselves to praise McCain and attack Obama. You may remember reporter Liz Sidoti serving John McCain his favorite Dunkin’ Donuts (with sprinkles) at the Associated Press meeting (at the same meeting, Obama was called “Osama”). If that wasn’t enough, Sidoti followed that up with a hit piece on Obama.

Also fighting for her seat on the Lap Dog Express, Jennifer Loven produced an Obama hatchet job that was so devoid of truth it made one reporter’s eyes bleed and another called it mind numbing.

In may not be a coincidence that most of these bad articles are coming from the Associated Press, since Rupert Murdoch (owner of Fox News) joined the AP Board of Directors in April.

UPDATE: The Jed Report put together this great video of the media fawning over McCain’s new airplane:

This was written by Iron Knee. Posted on Sunday, July 6, 2008, at 11:54 am. Filed under Hypocrisy. Tagged McCain. Bookmark the permalink. Follow comments here with the RSS feed. Both comments and trackbacks are currently closed.