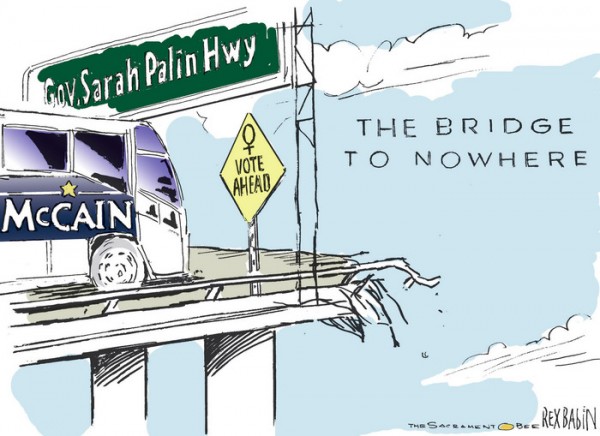 UPDATE: According to the New York Times, the McCain campaign sold out to the Christian conservatives. McCain had wanted to pick Joe Lieberman or Tom Ridge.

But both men favor abortion rights, anathema to the Christian conservatives who make up a crucial base of the Republican Party. As word leaked out that Mr. McCain was seriously considering the men, the campaign was bombarded by outrage from influential conservatives who predicted an explosive floor fight at the convention and vowed rejection of Mr. Ridge or Mr. Lieberman by the delegates.

As a result, Palin wasn’t seriously considered until the last minute, and even the team assigned to vet Palin didn’t arrive until the day before the announcement was made.

This was written by Iron Knee. Posted on Monday, September 1, 2008, at 8:29 pm. Filed under Humor. Tagged Palin. Bookmark the permalink. Follow comments here with the RSS feed. Both comments and trackbacks are currently closed.