Was Jesus a rabble rouser?

Last night at the Republican convention, the punch line of jokes seemed to “community organizer”:

To help educate any people who don’t know what a ‘community organizer” is, here are some notable examples from history:

Are these people just rabble rousers?

I know that making fun of community organizers is part of a GOP strategy of taking an opponent’s strengths and converting them into weaknesses, like Swift boating John Kerry’s service in Vietnam. But maybe people have become aware of this strategy, and won’t tolerate it any more. Or maybe the people laughing at community organizing just can’t understand why someone like Obama would pass up a lucrative job on Wall Street in order to work for a church helping the poor.

Or maybe some of the Americans they are calling “rabble” will get roused, and this attack will backfire. Already, the Obama campaign has said that they are having huge outpouring in donations and volunteers, after Palin’s and Giuliani’s speeches last night. Maybe when McCain picked Palin to energize the base, he didn’t realize that it would energize the democratic base too.

UPDATE: In his speech last night, McCain gave a call to action:

If you find faults with our country, make it a better one. If you’re disappointed with the mistakes of government, join its ranks and work to correct them. Enlist in our Armed Forces. Become a teacher. Enter the ministry. Run for public office. Feed a hungry child. Teach an illiterate adult to read. Comfort the afflicted. Defend the rights of the oppressed. Our country will be the better, and you will be the happier. Because nothing brings greater happiness in life than to serve a cause greater than yourself. 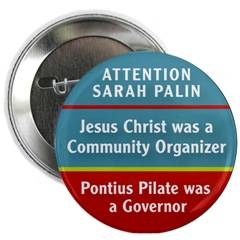 UPDATE 2: Another good example (albeit fictional) of a community organizer is George Bailey (played by James Stewart) in Frank Capra’s “It’s a Wonderful Life”. I guess if the McCain campaign looks down on community organizers, does that mean that McCain is playing the role of Mr. Potter?

This was written by Iron Knee. Posted on Thursday, September 4, 2008, at 9:28 pm. Filed under Irony. Bookmark the permalink. Follow comments here with the RSS feed. Both comments and trackbacks are currently closed.