“Boy George has released a new song that is inspired by Barack Obama. It’s called ‘Yes We Can,’ by Boy George. If that doesn’t put Obama over the top with the Joe Six-pack crowd, nothing will, huh?” -Jay Leno 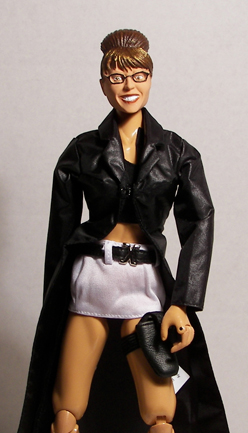 “There are only 56 days until the presidential election. Most of the attention now is centered around John McCain’s running mate, Sarah Palin. This is for real. They’re selling Sarah Palin action figures online. I don’t know where they get the outfits for these, but she looks like the sluttiest librarian of all time. Sad incident at Toys ‘R’ Us today when the Sarah Palin dolls shot My Little Pony.” -Jimmy Kimmel

“I’m feeling a little sheepish, ladies and gentlemen. I have a confession to make. Last night, I had my first naughty dream about a vice presidential candidate. And it wasn’t Joe Biden.” -David Letterman

“By the way, I thought this was interesting. Sarah Palin refuses to come on the ‘Late Show.’ Yeah. Or, as she calls it, ‘the bridge to nowhere.'” -David Letterman

“And you know, it’s amazing, you know those glasses that she wears? Those are like a hot item right now. Everybody’s buying them. They’re huge, selling much better than the Joe Biden hair plugs. Those aren’t moving at all. They can’t give those away.” -Jay Leno

“Dick Cheney told reporters this week, there’s no reason why Sarah Palin cannot be a successful vice president in the McCain administration. In fact, not only can she shoot a lawyer in the face, she can field dress him as well.” -Jay Leno

“As you all know, President Bush was not at the Republican convention due to a disaster: his presidency.” -Jay Leno

“Well, as you know, this past weekend, the government announced a massive bailout of mortgage lenders, Fannie Mae and Freddie Mac. To give you an idea how big this bailout is, they actually had to tell President Bush about it.” -Jay Leno

“What do you think of McCain’s slogan? ‘Country First.’ That’s his slogan, ‘Country First.’ Wasn’t that one of those big mortgage companies that folded about a couple months ago?” -Jay Leno

“Hey, some good news for John McCain. His poll numbers are up 4%, and liver spots down 3%.” -Jay Leno

“Thank goodness. I don’t know what it’s doing around the country, but here in New York City we had a wet, rainy day. Today, John McCain admitted he doesn’t know how many umbrellas he owns.” -David Letterman

This was written by Iron Knee. Posted on Friday, September 12, 2008, at 7:59 am. Filed under Humor. Bookmark the permalink. Follow comments here with the RSS feed. Both comments and trackbacks are currently closed.