Do Latte Drinkers Vote for Obama? 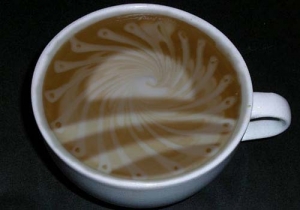 I’ve got news for all the latte-drinking, Prius-driving, Birkenstock-wearing, trust fund babies crowding in to hear him speak! This guy won’t last a round against the Republican attack machine. He’s a poet, not a fighter.

The image at right notwithstanding, is there some connection between latte drinkers and Obama voters? Urbanspoon found that indeed, there is a mild correlation between states that voted for Obama in the primaries and the number of Starbuck’s stores per capita. Interestingly, there was no correlation at all with Prius drivers or Birkenstock wearers (they couldn’t figure out how to measure the number of trust fund babies per state, but didn’t find much correlation with per capita income).

But they used data from the primary election, which has the benefit of being real numbers rather than polling data. But we’d like to see if the numbers still work for the general election. If we take the average of today’s polling data (from Electoral Vote) and compare it to the number of Starbuck’s stores per capita in each state, we get the same mild correlation (the black line shows the trend of the Starbucks data): 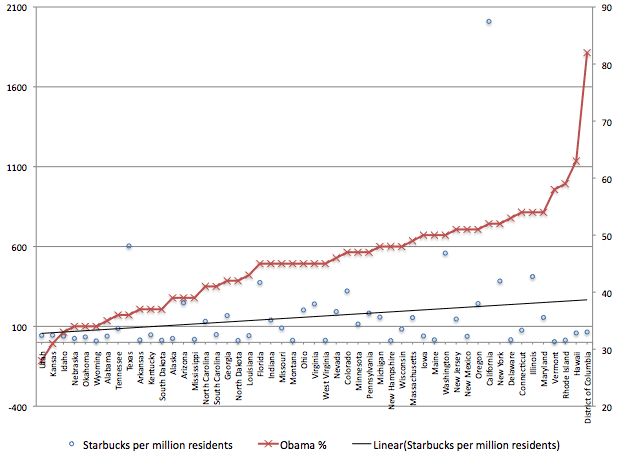 I also note that Buffenbarger’s prediction was wrong. With Obama currently ahead again in the polls for both the popular vote and the Electoral College, he seems to have already lasted more than one round against the Republican Attack Machine. Maybe he’s a poet and a fighter.

This was written by Iron Knee. Posted on Sunday, September 21, 2008, at 1:41 pm. Filed under Irony. Tagged Obama. Bookmark the permalink. Follow comments here with the RSS feed. Both comments and trackbacks are currently closed.