During the first presidential debate Friday night, McCain criticized Obama for being naive when he said that the US should be willing to go into Pakistan to take out terrorists. “If the United States has al Qaeda, bin Laden, top-level lieutenants in our sights, and Pakistan is unable or unwilling to act, then we should take them out,” said Obama. “He said that he would launch military strikes into Pakistan,” retorted McCain. “You don’t do that. You don’t say that out loud. If you have to do things, you have to do things, and you work with the Pakistani government.”

So just 24 hours later, while on a stop for cheesesteaks in South Philadelphia, a student asked McCain’s VP pick about Pakistan and whether we should be willing to cross the border from Afghanistan into Pakistan. “If that’s what we have to do stop the terrorists from coming any further in, absolutely, we should,” Palin responded. (You can see the video here.) It sounds like Palin “absolutely” agrees with Obama!

So does McCain criticize Palin for being naive? Of course not. Instead, he retracted her statement.

But what makes this doubly hypocritical is that McCain attacked the media for picking up on Palin’s statement. “In all due respect, people going around and… sticking a microphone while conversations are being held, and then all of a sudden that’s—that’s a person’s position. … This is a free country, but I don’t think most Americans think that that’s a definitve policy statement made by Governor Palin.”

Will McCain remember that the next time he brings up Obama’s comment about bitter people “clinging to guns and religion“? After all, that was recorded on a cell phone at a private event. Apparently, political positions articulated while standing in a cheesesteak restaurant don’t count as political positions, but comments made at a fundraiser in San Francisco do. 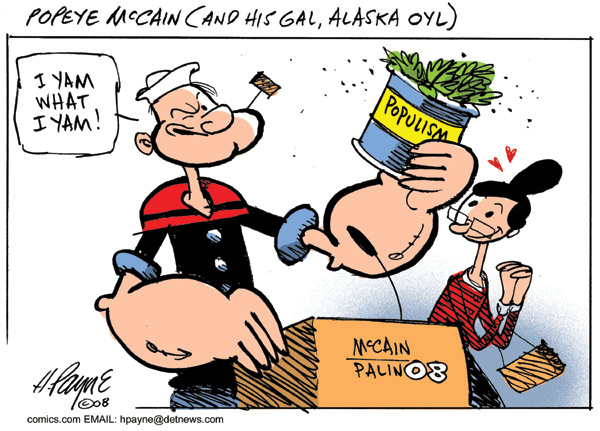 This was written by Iron Knee. Posted on Tuesday, September 30, 2008, at 6:00 am. Filed under Hypocrisy. Tagged McCain, Palin. Bookmark the permalink. Follow comments here with the RSS feed. Both comments and trackbacks are currently closed.