Top 10 McCain Quotes on the Economy

1. I’m going to be honest: I know a lot less about economics than I do about military and foreign policy issues. I still need to be educated. (Nov. 26, 2005, Wall Street Journal interview). 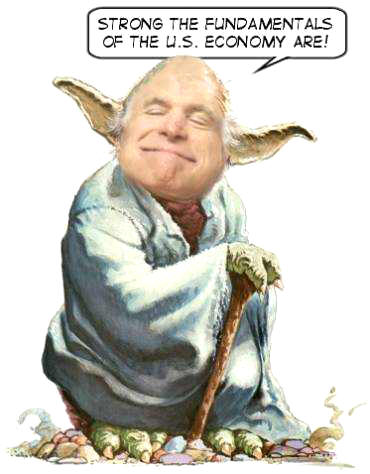 3. The issue of economics is not something I’ve understood as well as I should. I’ve got Greenspan’s book…. I’ve never been involved in Wall Street, I’ve never been involved in the financial stuff, the financial workings of the country, so I’d like to have somebody intimately familiar with it. (Dec. 18, 2007, in reference to a possible VP running mate — and then he picked Palin).

4. I love him [Phil Gramm] dearly. On issues of economics and … family values, there’s nobody that I know that’s stronger. (Jan 18, 2008, campaigning together in South Carolina)

5. As part of Social Security reform, I believe that private savings accounts are a part of it — along the lines that President Bush proposed. (March 3, 2008, in the Wall Street Journal)

6. I’m always for less regulation… I am fundamentally a deregulator. (Mar. 3, 2008, in the Wall Street Journal)

8. I’m very strong on the economy. I understand it. I have a lot more experience than my opponent. (July 2, 2008, on Good Morning America)

9. Opening up the health insurance market to more vigorous nationwide competition, as we have done over the last decade in banking, would provide more choices of innovative products less burdened by the worst excesses of state-based regulation. (Sept. 2008 in Contingencies)

10. You know, that there’s been tremendous turmoil in our financial markets and Wall Street and it is — people are frightened by these events. Our economy, I think, still the fundamentals of our economy are strong. (Sept. 15, 2008, from a campaign speech aired on CNN)

Borrowed from Not In My White House — references added.

This was written by Iron Knee. Posted on Wednesday, October 1, 2008, at 12:09 am. Filed under Hypocrisy. Tagged McCain. Bookmark the permalink. Follow comments here with the RSS feed. Both comments and trackbacks are currently closed.