What we know about Joe the “Plumber”

McCain spent more time talking about Joe the Plumber than Sarah Palin in the debate tonight: 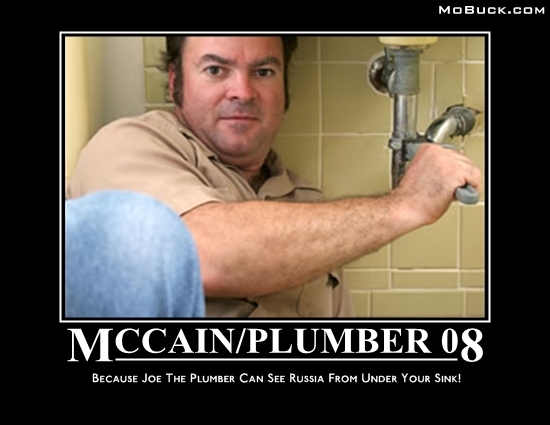 From Jeff Seemann at Daily Kos (and MoBuck.com). But not the real Joe.

UPDATE: Joe the Plumber has been confirmed as Samuel Joseph Wurzelbacher.

The New York Times has turned up that he is not licensed, either as a plumber or a contractor. Also, Joe claims to be a member of a local plumber’s union on his Facebook page, but a union official says that is not true. So he has been working illegally as a plumber. As for his attitude toward taxes, Joe has gotten into trouble for not paying them.

There have been some reports that Joe is not even registered to vote. However, it turns out that he is registered in Lucas county, Ohio, but his last name is misspelled (Worzelbacher instead of Wurzelbacher). So ironically his vote would one that the Republicans are hoping to challenge as invalid.

Other rumors are swirling around Joe. There is some evidence (albeit sketchy) that his uncle was one of the people involved in the Keating Five scandal. Some people even think that Joe was planted by the Republicans, but that seems unlikely.

Finally, and probably most significantly, Joe’s question misrepresents his situation. He stated that he was thinking of buying the plumbing business where he works, which makes $250,000 to $270,000. But that would be income, and businesses (unlike individuals) only pay taxes on profits, which is income minus expenses (expenses include salaries, rent, equipment, utilities, gas, etc.). So under Obama’s plan, that business would almost certainly be eligible for a tax cut. It is worth noting that, according to the GAO, two-thirds of companies are able to use the tax code to make their expenses larger than their income, and thus pay no taxes at all.

This was written by Iron Knee. Posted on Wednesday, October 15, 2008, at 8:58 pm. Filed under Humor. Tagged McCain. Bookmark the permalink. Follow comments here with the RSS feed. Both comments and trackbacks are currently closed.