A bunch of people have sent this photo to me to post, but I’ve been resisting since it is all too easy to capture someone in an awkward pose. The photo was actually taken as McCain started to exit off the stage at the last debate, but realized he was going the wrong way and abruptly changed course. 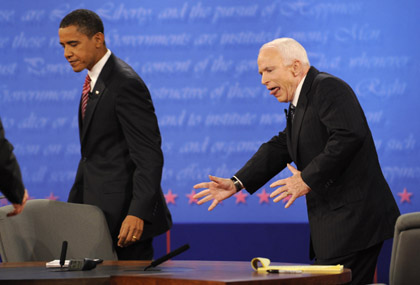 But what IS funny are some of the captions that people have thought up for this photo. My faves so far:

McCain finally gets to first base with his invisible friend Joe the Plumber.

McCain tries to make good on his pre-debate promise to kick Obama’s you-know-what.

So I invite you to submit your own caption in the comments.

This was written by Iron Knee. Posted on Friday, October 17, 2008, at 8:35 pm. Filed under Humor. Tagged McCain. Bookmark the permalink. Follow comments here with the RSS feed. Both comments and trackbacks are currently closed.