Remember those (often mythical) PUMA (Party Unity My Ass) voters who claimed they were going to vote for McCain so that Hillary Clinton could run against him in 2012? Well, it looks like it might work the other way around, this time literally with an Ass (donkey).

This photo from Newsweek shows Sarah Palin on the campaign trail in battleground state Nevada wearing the latest in fashion, a scarf with the word “Vote” followed by the Democratic Party donkey. Maybe Palin knows that McCain can’t win, and is positioning herself for a run in 2012. Palin’s new campaign slogan might just be “I’m not McCain”.

Is this some of that clothing for which the McCain campaign paid $150,000? 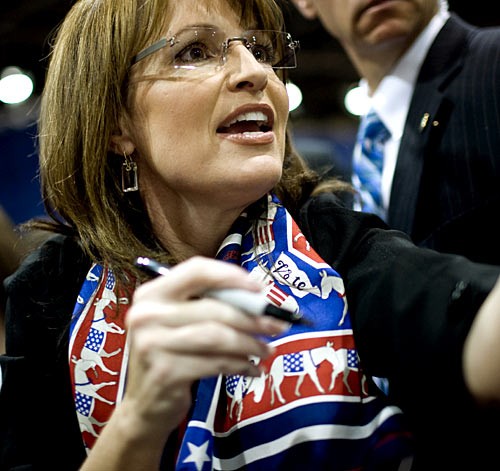 This was written by Iron Knee. Posted on Wednesday, October 22, 2008, at 3:55 pm. Filed under Irony. Tagged Palin. Bookmark the permalink. Follow comments here with the RSS feed. Both comments and trackbacks are currently closed.