“You know, do you realize this is our first black president since the first season of ’24’?” -Jay Leno

“Really, an historic night last night. You may have heard, Barack Obama will be the first black president of the United States of America. … Obama is also the first Democrat to receive more than 50 percent of the vote since Jimmy Carter, the first senator to be elected since Jack Kennedy, the first Muslim to be … I said too much.” -Jon Stewart

“You know, it’s amazing, Barack Obama won in Florida and still became president. That never happens. In fact, today, Democrats are asking for a recount. They can’t believe they won.” -Jay Leno

“I watched Obama’s victory speech in Grant Park. I actually loved watching the shots of the crowd, which looked like a Benetton ad — different races, different ages, all different kinds of people. I thought it was fantastic. Meanwhile, over at McCain’s speech, there were all different kinds of white people. They had tons of them — yuppies, golfers, Osmonds.” -Craig Ferguson

“And, of course, it was a huge celebration over at Barack Obama headquarters, otherwise known as MSNBC.” -Jay Leno

“Ladies and gentlemen, Barack Obama is our new president. And I think I speak for most Americans when I say, anybody mind if he starts a little early?” -David Letterman

“Well, right after Barack Obama clinched the [election], did you see TV cameras caught Jesse Jackson standing at the celebration with tears in his eyes? Not because Barack won, because he makes more than $250 thousand a year.” -Jay Leno

“Obama’s victory would not have been not possible without the help of the leaders who came before him — Martin Luther King, Jesse Jackson, and most importantly, President Bush, who has set the bar pretty low.” -Craig Ferguson

“Last night, after Barack Obama was declared the winner, President Bush called Obama, promised to work with him to guarantee a smooth transition. Yeah. Yeah, when we heard this, Obama said, ‘Thanks, but you’ve done enough.'” -Conan O’Brien

“President Bush called Sen. Obama last night to congratulate him and this is an actual quote. He said, “What an awesome night for you and your family.” I think his eloquence is what we will remember most about Bush.” -Jimmy Kimmel

“Obama thanked the President for his call and for all he did to help him get elected.” -Jimmy Kimmel

“See, I got to admit, as a comedian, I’m gonna miss President Bush. Because Barack Obama is not easy to do jokes about. He doesn’t give you a lot to go on. See, this is why God gave us Joe Biden.” -Jay Leno

“I would like to say one thing to Senator John McCain . Listen, senator, you don’t show up for me, America doesn’t show up for you.” -David Letterman

“Attention passengers, the Straight Talk Express is no longer in service.” -David Letterman

“Last night’s results mean one thing for John McCain. That is that Sunday’s debate will be even more crucial. He’s really up against the wall now.” -David Letterman

“Did you see the concession speech last night? John McCain was generous. He was gracious. He was statesman-like. And I was thinking well, he should have tried that earlier.” -David Letterman

“His concession speech last night was so effective, so positive, that he shot up 4 points in the polls.” -David Letterman

“How about Sarah Palin, ladies and gentlemen. Right now on her way back to Alaska. And I’m thinking oh, I wouldn’t want to be a moose now.” -David Letterman 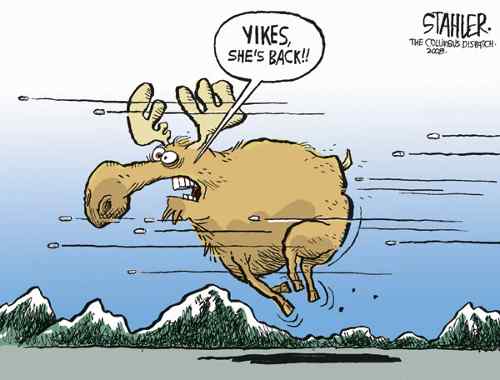 “But on the bright side, at least now Tina Fey can spend Saturdays with her family again, so that’s a good deal.” -David Letterman

“After congratulating President-elect Obama, President Bush called John McCain to commend him on his well-fought campaign. President Bush also phoned Sarah Palin and she said, ‘Oh yeah, I’m sure this is the real Bush, I’m not falling for that again.'” -Jay Leno

“People all over the world are celebrating Barack Obama’s victory. In fact, Sarah Palin watched the Russians celebrating from her house.” -David Letterman

“At the end of the evening, the electoral vote count was 349 for Obama, 148 for McCain. Or, as Fox News says, too close to call.” -David Letterman

“People were worried about the Bradley effect. Apparently, it was not nearly as strong as the Bush effect.” -Jay Leno

“Hey, did I call it or what? Six months ago I predicted Ralph Nader would come in third. Did I call it?” -Jay Leno

“But Republicans had a bad night all around. I mean, anywhere you look. Even the crooked voting machines in Florida broke down.” -David Letterman

“A huge turnout in Hollywood. In fact, for the first time ever, there were more celebrities in voting booths than in rehab. That has never happened. They say this was most expensive election in history, costing over $1 billion. Do you realize that is the equivalent of three Wall Street CEO bonuses?” -Jay Leno

“The stock market dropped over 400 points today, which is not a reflection on Obama. No, the brokers just realized they’ve still got three months of George Bush.” -Craig Ferguson

“Hey, did you get a lot of those robo-calls over the weekend? Those stupid things. I got one from Governor Schwarzenegger. Then again, isn’t every call from Arnold Schwarzenegger a robo-call, really?” -Jay Leno

“But right about now Joe the plumber is meeting with his transition team. They’re going to help ease him from obscurity back to oblivion.” -David Letterman

“One good thing did come out of this for Joe the plumber. He’s branched out into heating and air conditioning.” -David Letterman

“In California, the ban on gay marriage passed. Gay people are furious. They stormed the State Capitol in Sacramento and caused $3 million in improvements to the city.” -Craig Ferguson

“And in what has to be one of the most ridiculous moments yesterday, it looks like convicted Sen. Ted Stevens of Alaska has won re-election. How does that make the guy who lost feel, huh? What’s that concession speech like? ‘We gave it our best, but the voters are preferred a convicted, 84-year-old felon who’s going to prison.'” -Jay Leno

This was written by Iron Knee. Posted on Friday, November 7, 2008, at 1:16 pm. Filed under Humor. Bookmark the permalink. Follow comments here with the RSS feed. Both comments and trackbacks are currently closed.