Let he who is without sin stone the first cast

A representative of the Catholic Church in England, Christopher Jamison, has attacked Disney, claiming the company has corrupted children and exploited spirituality to encourage consumerism. He cited films such as Sleeping Beauty and 101 Dalmations that seem to feature moral battles, but in reality get into children’s imaginations and make them greedy for the merchandise that goes with them. He also accused them of turning Disneyland into a modern day pilgrimage site. Father Jamison is a contender to be the next Archbishop of Westminster, and starred in the BBC hit television series “The Monastery”. 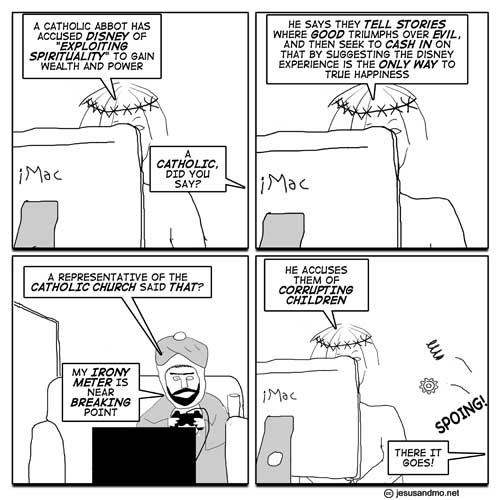 This was written by Iron Knee. Posted on Tuesday, December 2, 2008, at 6:22 pm. Filed under Irony. Bookmark the permalink. Follow comments here with the RSS feed. Both comments and trackbacks are currently closed.