The Bush Boom – How a “Misunderestimated” President Fixed Our Broken Economy

This might just be the most embarrassing book ever written: 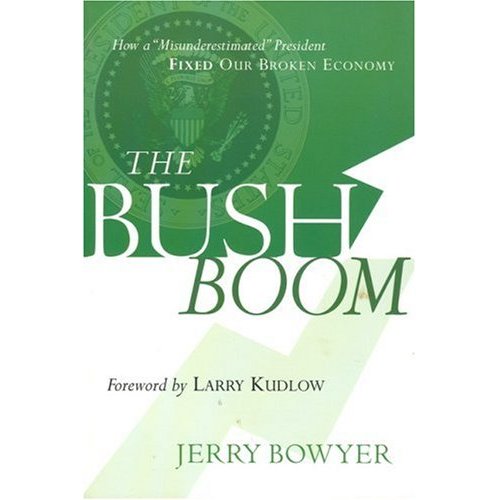 And you can buy a copy from Amazon. Or better yet, just go there to read the many comments, such as these fine examples:

Finally! A book that proves the existence of an alternate universe. Obviously, a rip in the space/time continuum between this universe and the other universe where Bush is presiding over a ‘boom economy opened up and this book fell through. Can there be ANY other explanation?

I bought this book in a bundle along with “19-0: The Historic Championship Season of New England’s Unbeatable Patriots” and both were excellent. Highly recommended!

Many of you know some basic economic facts…

Now a lot of people would say that’s terrible, and note that they’d expect income and stock indexes to rise by at least the rate of productivity growth and inflation combined, but those people are short-sighted.

If that happened, think of all the taxes we’d have to pay? No, instead President Bush has saved us all a fortune on taxes, by ensuring that on average we get poorer every year, and that our investment accounts have no gains, thus sparing us from the capital gains tax.

Finally, a thoughtful explanation of how Bush has cut all our taxes, by destroying all our incomes!

The economy has certainly just had a “Bush Boom” in the past few days. I heard it from miles away!

This was written by Iron Knee. Posted on Friday, January 16, 2009, at 2:25 pm. Filed under Irony. Tagged Bush. Bookmark the permalink. Follow comments here with the RSS feed. Both comments and trackbacks are currently closed.