I had to think twice about posting this article, because my posting this is itself ironic (isn’t it my job to be making fun of other people’s irony and hypocrisy?). But here goes anyway.

It has long bothered me that the mainstream media often gives a platform to people who really don’t deserve one, because conflict — even if made up — sells newspapers (or TV ads or whatever). Thus we continue to hear about people like “Joe the Plumber” long after his 15 minutes of fame have run out. Note that even progressive papers do this; it seems to be endemic.

So it was with mixed feelings that I read the latest article about dear old Joe Wurzelbacher. It seems that he made a scheduled appearance at a Borders bookstore in DC to sell his new book. The bad news is that this was news. The good news is that only around 11 people showed up (see photo), and the event, which was scheduled to last three hours, ended in less than one. Maybe the media will realize that this person and his opinions aren’t really news anymore and leave it alone in the future? 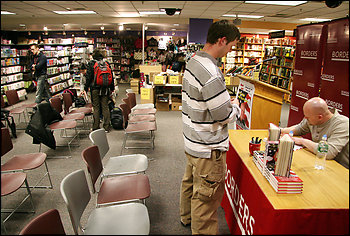 This was written by Iron Knee. Posted on Saturday, February 28, 2009, at 11:31 am. Filed under Irony. Tagged Media. Bookmark the permalink. Follow comments here with the RSS feed. Both comments and trackbacks are currently closed.