The Politics of Star Trek

I went to see the new Star Trek movie today (and really enjoyed it!). When I came home, I discovered a rash of websites that talk about Star Trek and politics. 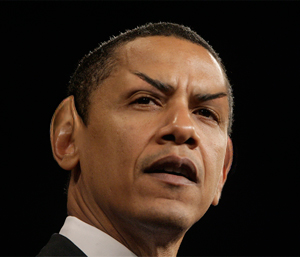 Most obviously, there are the articles that declare that President Obama is Mr. Spock — both exotic half-breeds with their trademark calm and logical mien. Not to mention funny ears. Personally, I prefer to think of Obama as Jean Luc Picard, but either way it does seem like Obama has given us a cabinet that looks like the Enterprise bridge crew. No Klingons yet, but that didn’t happen until The Next Generation on Star Trek either (maybe in Obama’s second administration?). As even Leonard Nimoy points out “The Enterprise crew was a professional team of people solving problems together.” 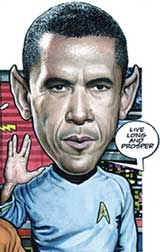 And it is no secret that Obama is a Star Trek fan — when Nimoy went to a political event in 2008, Obama greeted him with the Vulcan hand signal. And when talking about NASA at a campaign event in Wyoming, Obama said “I grew up on Star Trek. I believe in the final frontier.” And some Red Staters have their uniforms tied up in knots because Obama requested a private showing of the new Trek movie.

In a way, Star Trek is somewhat responsible for Obama’s rise in politics! When Obama was running for the Illinois Senate in 2004, his opponent was Republican Jack Ryan, whose campaign collapsed because of a sex scandal revealed during his divorce from Jeri Ryan, who was best known for her sexy role as Seven of Nine in Star Trek Voyager. If you don’t believe me, then just remember that resistance is futile.

But the article that really made me laugh is this one: When and Why did the Federation Turn Socialist? – A Question I Hope Will be Answered in the New Star Trek Movie, which argues that the United Federation of Planets is (gasp!) socialist. After all, there doesn’t seem to be any money in use, and just where did all the large multinational corporations go? They then get all upset because the Federation seems to be a nice place, when everybody knows that “There has never been a society that combined full-blown socialism with prosperity or extensive ‘noneconomic’ liberties for the population. And there has never been a transition to socialism without large-scale repression and mass murder.”

One final thought — if Obama is Spock, then this article claims that Dubya is Kirk. Not just because both of them have a down-on-the-farm (or ranch) folksy persona, but also because of their gutsy, shoot-from-the-hip style of decision-making. Or maybe, as Newsweek claims, Dubya is Darth Vader. 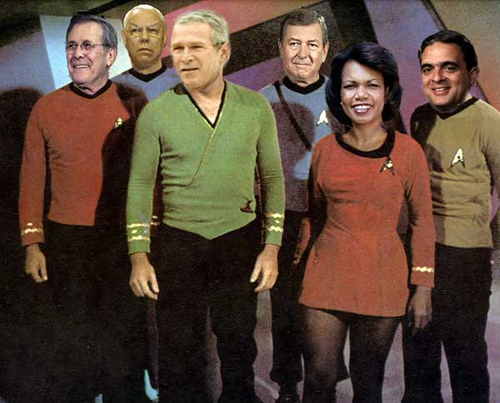 This was written by Iron Knee. Posted on Sunday, May 10, 2009, at 11:38 pm. Filed under Humor. Tagged Obama. Bookmark the permalink. Follow comments here with the RSS feed. Both comments and trackbacks are currently closed.