“Latest rumor in the entertainment industry is that Sarah Palin may be getting her own TV show. Experts say it will be perfect for TV viewers who find Paula Abdul too coherent.” – Conan O’Brien

“Sarah Palin no longer governor of Alaska, and it looks now, like she may get her own television program, you know. And I was thinking I don’t know, she seems pretty camera shy.” – David Letterman

“But here’s what I can tell you about having your own TV show. Sarah, if you’re watching, and you get a TV show, you gotta be very careful what you say on the air, because you can get yourself into a lot of trouble, okay?” – David Letterman

“Today, House Speaker Nancy Pelosi said she sees no need for a House resolution in praise of Michael Jackson. Pelosi added, ‘Isn’t it enough that I’m slowly starting to look like him?'” – Conan O’Brien 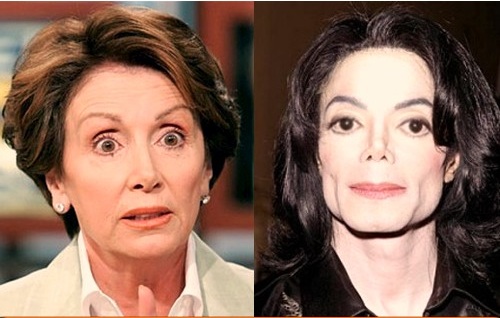 All Hat No Cattle

“Now how about this guy? That Osama bin Laden, what a guy. And turns out now his first wife — and he had, like, 30 or 40 wives — well, his first wife has written a book about being married to a bin Laden. And she says that she suspected the marriage was in trouble when he told her he was going for a hike on the Appalachian Trail.” – David Letterman

“Najwa is her name, Najwa, and she said they had a lovely wedding. Friends got together and tied tin cans to the back of their camel.” – David Letterman

“The latest figures show that because of the bad economy, homelessness in the suburbs is increasing. So the next time you hear something rustling around in your trash, it could be one of the ‘Real Housewives of New Jersey.” – Conan O’Brien

“Pizza Hut has announced they are rebranding themselves as ‘The Hut.’ When asked why, a spokesman for Pizza Hut said they are tired of watching customers get winded when saying the full name.” – Conan O’Brien

“This week in Moscow, President Obama and President Medvedev agreed to cut the United States and Russia’s nuclear stockpiles by a third. They also agreed to cut Medvedev’s name by a ‘dev.’ It’s going to be Medved.” – Conan O’Brien

“Oh, by the way, President Obama is in Italy attending the world summit, the G8 summit leaders. And meanwhile, in Arizona, Senator John McCain sat on his porch waving at cars.” – David Letterman

“And as you know, in the G8 summit, the world leaders get together, there’s usually a big protest. Not so many protests this year in Italy. However, there was one small Fire Dave rally.” – David Letterman

This was written by Iron Knee. Posted on Wednesday, July 15, 2009, at 12:21 am. Filed under Humor. Bookmark the permalink. Follow comments here with the RSS feed. Both comments and trackbacks are currently closed.