Did you ever see anyone arrested wearing a Bush T-shirt? 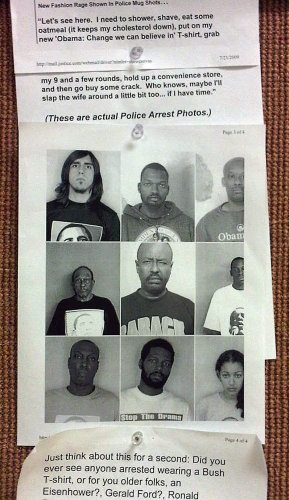 A county judge in Lubbock, Texas has caused a kerfuffle for posting anti-Obama notices on the courthouse wall. Actually, they are more about Obama T-shirts, but they are pretty offensive nonetheless.

One notice is a fake diary entry:

Let’s see here. I need to shower, shave, eat some oatmeal (it keeps my cholesterol down), put on my new “Obama: Change we can believe in” T-shirt, grab my 9 and a few rounds, hold up a convenience store, and then go buy some crack. Who knows, maybe I’ll slap the wife around a little bit too… if I have time.

Just think about this for a second: Did you ever see anyone arrested wearing a Bush T-shirt, or for you older folks, an Eisenhower?, Gerald Ford?, Ronald Reagan?

There are other anti-Obama cartoons as well. Some people accuse the judge of being racist, but even if you think he isn’t being racist, I don’t think it is appropriate for him to be posting political materials like this in the courthouse.

Even so, I can’t help but have some fun, so here’s a few retorts that I would love to post below his notice:

That’s what happens when you make it illegal to wear Obama T-shirts in your county. In addition to DWB, you must have DWWOTS.

Nobody is stupid enough to be caught wearing a Bush T-shirt.

The judge defended his actions, saying he didn’t think there was anything wrong with what he posted and that he had not heard from anyone who did. To which I would respond: Did you ever notice that as a judge, people might be a bit reluctant to complain about your offensive materials plastered all over your courthouse walls?

If you think of a cute retort, I welcome it in the comments.

UPDATE: A reader contributed this particularly good one:

This was written by Iron Knee. Posted on Wednesday, August 12, 2009, at 5:05 pm. Filed under Hypocrisy. Tagged Obama. Bookmark the permalink. Follow comments here with the RSS feed. Both comments and trackbacks are currently closed.