[This post was submitted by special ironic correspondent Avi Brand]

The newly elected Marvel Universe Barack Obama made one of the most infamous cabinet appointments of all time, choosing Norman Osborn (formerly the murderous and insane Green Goblin) as head of all global peacekeeping agencies, including the revered Avengers. This version of Barack Obama has literally handed the reins of world peace and safety over to one of the most evil men on this or any other planet. Osborn has already clandestinely allied himself with Doctor Doom, Namor the Sub-Mariner, Loki the Norse God of Mischief, and the Criminal Syndicate Boss/Demon Sorcerer The Hood in an attempt to cement his power base and further extend his villainous tentacles into every corner of the Marvel Universe. Meanwhile, his agents are hunting down heroes like Tony Stark (Iron Man) and even Captain America, the very symbol of American power. And all with the Marvel Universe Obama’s tacit approval. Makes Reverend Wright and Bill Ayers look like kindergartners.

The Fox News Barack Obama is a shady, smooth-talking totalitarian communist who is on an unholy mission to strengthen the federal government by any means necessary to a deadly sharp edge at home while systematically weakening our military oversees. His failed economic policies have destroyed this great country that we grew up in, and he will stop at nothing to blame America first for any problem anywhere in the world. Under his iron-fisted rule, the US will devolve into a Soviet-style, Nazi dictatorship that will enforce mandatory abortions on women, Koran classes on men, and euthanasia for old people. After barely seven months in office, he is already the worst president this nation has ever had. He is certainly the most anti-American. Makes Stalin and Hitler look like amateurs. 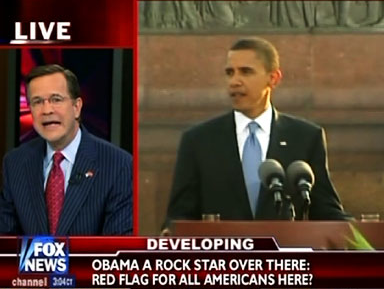 While Fox News Barack Obama is certainly a terrible tyrant and a phony (I certainly wouldn’t vote for him), his evil pales in comparison to what the naive, weak, and ineffectual Marvel Universe Barack Obama has allowed to happen. Norman Osborn holds the real reigns of power in that world (kind of like Dick Cheney) and he is putting his nefarious plans into action as we speak. The Marvel Universe electorate would do well to elect a Republican in 2012.

Hmmm… I wonder what The Marvel Universe Fox News is saying about Norman Osborn? No doubt that he’s doing what’s necessary to protect us from the Skrulls.

This was written by Iron Knee. Posted on Wednesday, September 2, 2009, at 10:34 am. Filed under Humor. Tagged Obama. Bookmark the permalink. Follow comments here with the RSS feed. Both comments and trackbacks are currently closed.