The Next (Sleeping) Wall Street Bubble

The New York Times has an interesting article today about the Simmons Bedding Company, which is about to declare bankruptcy. Small investors stand to lose everything (bondholders alone will lose almost $600 million). Not to mention the employees, who are not only out of a job, but had their pensions converted into shares of company stock, which is now pretty much worthless.

Meanwhile, the Wall Street private equity investment firm that bought them made a tidy profit of $77 million, plus millions of dollars in fees. Last year, the firm even gave itself a raise. Other investment banks, which helped arrange the takeovers of Simmons — the company has changed owners seven times in the last two decades — and sold bonds made $750 million in profits.

How did this happen? Each investment firm buyer in turn leveraged the company debt more and more. In 1991, the company owed $164 million in debt, but today that figure is a staggering $1.3 billion. They then sold the company for more than they paid for it, making money. This continued until the worsening economy blew down the whole house of cards, leaving the debt holders and employees in the lurch.

This is not that different from the mortgage crisis, with a homeowner taking out a second or third (or seventh) mortgage until they get laid off and can no longer make the payments, but in this case they already sold the house to someone else and stuck them with the insanely high payments. In the topsy-turvy world of investment banking, the banks made out like bandits, and the rest of us lose. Big time.

And there are more companies like this. More than half the companies that have defaulted on at least some of their debt this year were involved with private equity firms like the one that bought Simmons. But these firms continue to make profits from their company casualties. And so goes our economy. 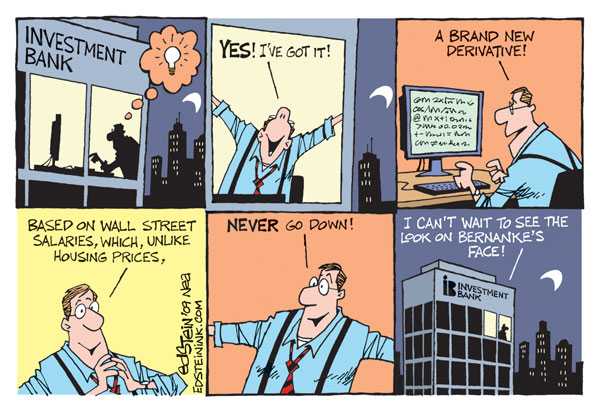 This was written by Iron Knee. Posted on Monday, October 5, 2009, at 12:33 pm. Filed under Irony. Bookmark the permalink. Follow comments here with the RSS feed. Both comments and trackbacks are currently closed.