What are we afraid of?

World military spending is exploding, having increased by 45% over the last ten years. The world spends the equivalent of $217 for each person on earth. And the US is leading the way. We spend five times more than China (the only other “superpower”). Ten times more than Russia. We spend more than twice of all of Europe put together. What about all those Arab or Islamic countries in the Middle East that we fear so much? We spend 11 times more than all of them put together.

To further put this in perspective, this is equivalent to $2700 for every American citizen, every year. No wonder we can’t afford health care, and yet lack of health insurance kills 45,000 Americans every year — more than any terrorism, war, or other military threat. 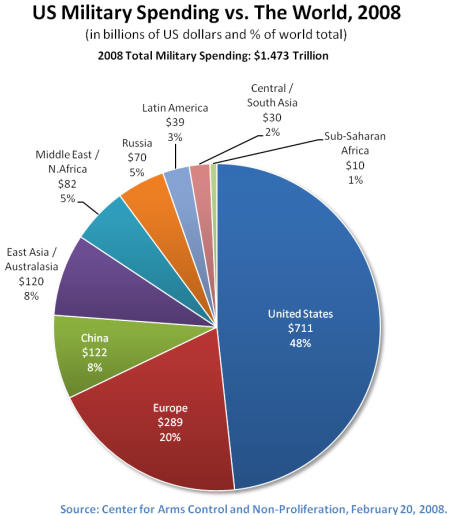 This was written by Iron Knee. Posted on Saturday, November 28, 2009, at 12:03 pm. Filed under Irony. Tagged Military. Bookmark the permalink. Follow comments here with the RSS feed. Both comments and trackbacks are currently closed.