Only Conservatives Allowed to Run Advocacy Ads During the Superbowl

But somehow, all that isn’t stopping CBS from running an ad during this year’s Superbowl from Focus on the Family, a conservative media ministry. Remember them? Among other things, they were the group that asked people to pray for rain to start exactly two minutes before Obama’s acceptance speech at the Democratic national convention back in August 2008, because they wanted the next president to be against abortion and gays (mysteriously, Obama’s speech had perfect weather, while the Republican convention had Hurricane Gustav). 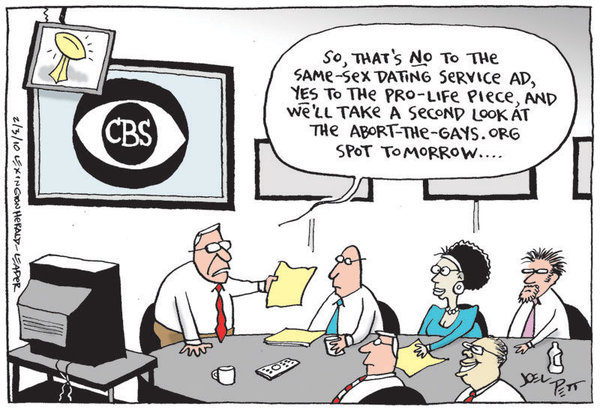 UPDATE: Richard Dawkins weighs in on the ad being run by Focus on the Family, which features football star Tim Tebow.

This was written by Iron Knee. Posted on Wednesday, February 3, 2010, at 10:47 pm. Filed under Hypocrisy. Tagged Conservatives, Media. Bookmark the permalink. Follow comments here with the RSS feed. Both comments and trackbacks are currently closed.