In the last presidential election, Dubya was so toxic that the Republicans didn’t even want him to come speak at their national convention. But I guess Mitt Romney has decided to rehabilitate him. In a speech yesterday at the CPAC convention, Romney said:

I am convinced that history will judge President Bush far more kindly — he pulled us from a deepening recession following the attack of 9-11, he overcame teachers unions to test schoolchildren and evaluate schools, he took down the Taliban, waged a war against the jihadists and was not afraid to call it what it is — a war, and he kept us safe. I respect his silence even in the face of the assaults on his record that come from this administration.

In other words, black is white, night is day. Taking these claims from bottom to top:

Romney also attacked health care reform, claiming “Obamacare is bad care for America.” But he failed to mention that he worked for health care reform in Massachusetts, which was used as one of the primary models for what he now derisively calls “Obamacare”.

Of course, the real reason Romney is saying these things is to kiss up to the old Republican establishment, so he can become their candidate for president. The traditional Republican political machine must be desperate for an alternative to Sarah Palin. 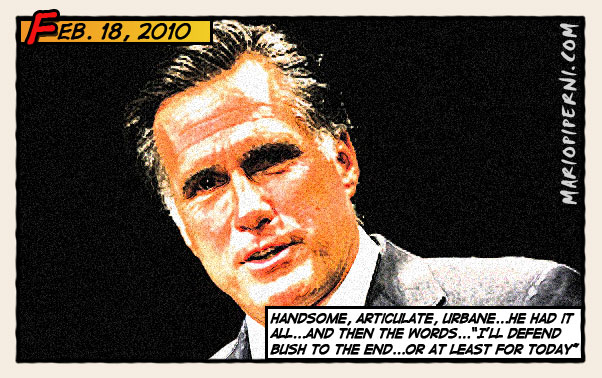 If you liked this, you might also like these related posts:
This was written by Iron Knee. Posted on Saturday, February 20, 2010, at 12:27 am. Filed under Hypocrisy. Tagged Bush. Bookmark the permalink. Follow comments here with the RSS feed. Both comments and trackbacks are currently closed.