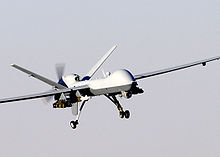 A fascinating and disturbing interview in Spiegel talks about the increasing use of “drones” — unmanned robotic aircraft that are piloted by remote control from anywhere in the world. The US currently has around 7,000 drones flying, and 43 other countries have some kind of drone in their arsenal.

Even though you might think that the pilot of a drone would suffer from less stress, since they are flying the aircraft much like one would play a video game, and are not personally in any danger. But ironically, the reverse is true. Drone operators are reporting higher levels of combat stress, increased fatigue, emotional exhaustion and burnout than actual troops in a combat area.

In fact, the very thing that makes drones safer might be causing the extra stress. As one drone pilot explained it “You’re going to war for one hour, and then you get in the car and drive home, and within two minutes you’re sitting at the dinner table talking about your kids’ homework.” This kind of casual, switch-on / switch-off warfare is deeply disturbing on many levels.

In real war, you are in the company of other soldiers, sharing the bad experiences as a “band of brothers”. But drone pilots don’t have that support. They are alone. Even worse, soldiers in a war area are in a situation where they can justify their actions as “kill or be killed”. But the drone pilot is not in any immediate danger.

In the end, making war “safer” might have the opposite effect. If there is less risk associated with war, then we are more likely to get into stupid wars.

This was written by Iron Knee. Posted on Tuesday, March 16, 2010, at 9:00 pm. Filed under Irony. Tagged War. Bookmark the permalink. Follow comments here with the RSS feed. Both comments and trackbacks are currently closed.